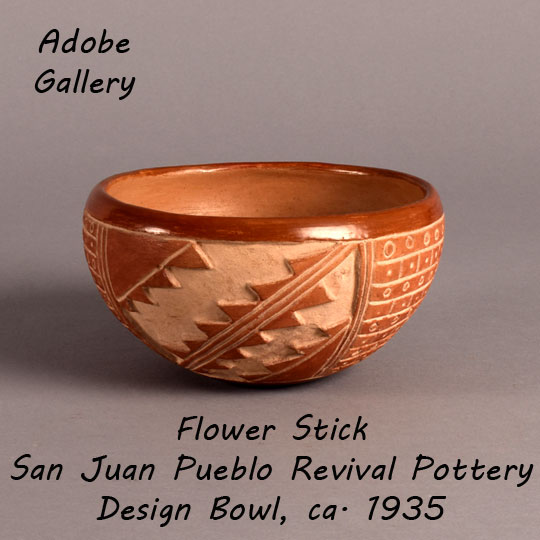 This polychrome pottery bowl by artist Crucita Trujillo Cruz beautifully expresses the new style of pottery developed at San Juan Pueblo in the 1930s to replace the traditional undecorated style that had existed for hundreds of years.  This circa 1935 pottery bowl has two sections of horizontal rows with designs alternating between circles in one row, and dots in rectangular boxes in the next row.  The other two sections of designs are highlighted by carving away adjoining clay to make the designs appear in raised position.  The interior of the bowl was stone polished in its natural clay state.  The underside of the bowl was polished red and features the glyph of the potter.

Crucita Trujillo Cruz (1886-1969) was one of the seven original potters who established the San Juan Revival style of pottery, which was a result of excavations around 1930 at their ancestral pueblo Potsuwi’i where ancient pottery (c.1450-1500) with incised designs were unearthed.  Further research at the Museum of New Mexico with Kenneth Chapman by several potters resulted in a change in San Juan pottery to incorporate their prehistoric style.  [Schaaf, 2000:241]

There is a similarity in appearance with this new style to that of their neighboring Tewa-speaking Santa Clara Pueblo.  Crucita Trujillo Cruz was also known as Phe Povi (Flower Stick).

It appears that pottery by Crucita Trujillo Cruz is rare, as Schaaf, in his referenced book below, only indicates a single jar in the Laboratory of Anthropology collection and a single one in the School of American Research collection, both of which are micaceous jars, not painted ones.  A review of Adobe Gallery sales indicates that we have had only one of her works in the past.

Provenance: This Flower Stick San Juan Pueblo Revival Pottery Design Bowl, ca. 1935 is among several that were collected by Mary Louise Mark of Westerville, Ohio.  Ms. Mark (1878-1972) was a Professor of Sociology and Statistics at Ohio State University.