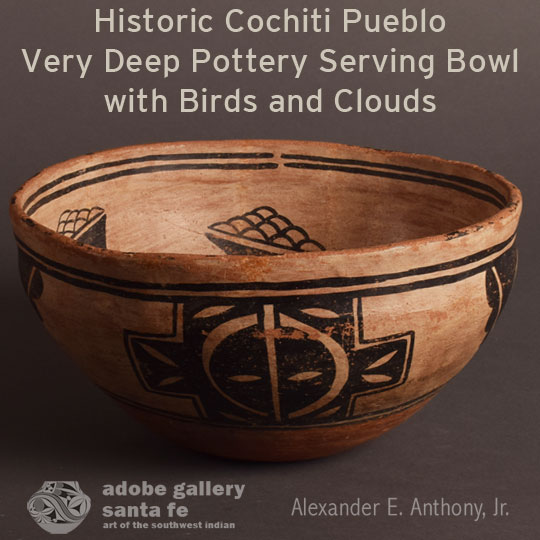 Some pueblo pottery bowls and jars simply stand out from others in vessel shape and design.  Some early potters were blessed with such artistic talents in forming the shape of a bowl and then selecting and applying a design or designs that require our admiration.  This historic bowl is such a bowl. The shape of the bowl at the rim area has that extra element of curvature that adds immeasurably to the appearance. The bowl slightly turns inward just below the rim and reverses direction for the last roll or two of clay, achieving a slight cinch before the rimms rolls outward.

The designs the potter chose for the bowl are bold and were applied with a strong black pigment.  The interior design is a typical Cochiti cluster of elements. The design in the bottom is a floral element, like a sunflower, but it expands in the middle where four large rain clouds emerge.   Two charming black birds are in flight between the clouds. A pair of black framing lines encircle the interior rim, both of which have a ceremonial line break. The rim was black but that has mostly worn off.

The exterior of the bowl is equally strong in designs.  Two rectangular designs each contain a circle with floating elements that are seen in the area outside of the circles.  Another pair of designs each are triangular in shape, mostly black with only two floating elements. Framing the triangles are clouds.  The design panel is contained with a double pair of framing lines just below the rim and another pair separating the cream slip from the red polished slip of the lower bowl.  The entire exterior design is penetrated with a ceremonial line break.

Condition: this Historic Cochiti Pueblo Very Deep Pottery Serving Bowl with Birds and Clouds is in excellent condition with only a minimum of paint abrasion.