This mid-twentieth century Hó óte Katsina doll is an excellent and accurate representation of the Hó óte Katsina.  He wears a yellow triangle on his forehead with a red and green outline, which represent flowers. He has celestial markings on his cheeks—a star on his right and a moon on his left.  His evergreen ruff is simulated with green yarn. Traditionally he wears a concha belt which is illustrated here with paint. He may wear a buckskin kilt with a Hopi embroidered sash hanging down his side.  He has a gourd rattle in one hand and a bow in the other.

He is a particularly popular Katsina because of his well-liked songs.  He appears as a group in the ordinary Katsina dances and sometimes in the Niman.  His dance forecasts the arrival of flowers of spring. This carving was most likely made as a present to a Hopi female as it is meant to be hung by the string around its neck.  It will not stand unaided.

Provenance: from the collection of a gentleman who inherited it from his uncle. 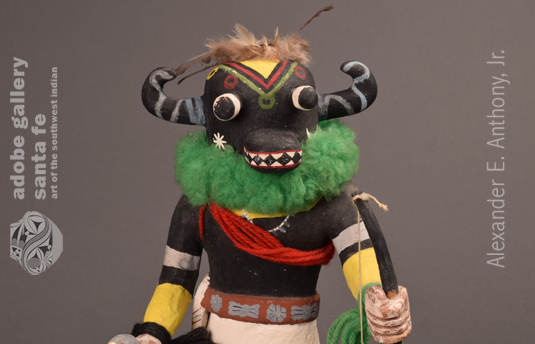