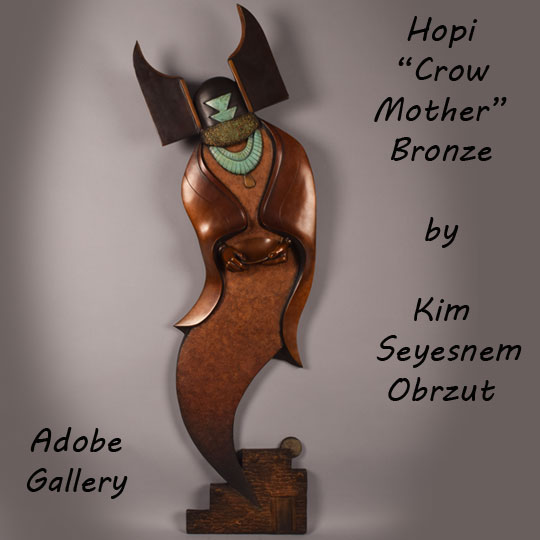 “Crow Mother” is a bronze sculpture by Hopi Pueblo artist Kim Seyesnem Obrzut.  It is a large piece with a powerful presence.  As a three-dimensional artwork that is designed to be mounted on a wall, it is most certainly unique.  We would suggest it be taken into consideration by collectors of Hopi art who wish to add new dimensions and textures to their walls.

The Hopi consider Angwusnasomtaqa (Crow Mother) to be a Katsina Mother. She is presented as a stately personage, moving slowly and singing quietly. It is she who initiates the young boys into the Katsina beliefs and culture. In this function, she is more forceful so as to gain the attention of the boys and deliver her message of the importance of the Katsina culture.

“Crow Mother,” which was completed in 2002, is the first Obrzut piece to make its way to Adobe Gallery.  What jumps out immediately is the consistently excellent quality of the various tones and textures.  It is clear that Obrzut is talented and experienced, as each of the many elements has its own look and feel.  They work together harmoniously to create a whole that feels natural and well-balanced.  While Obrzut’s technical skill is notable, it is her creativity and vision that elevate the piece beyond the ordinary. Her massive Crow Mother rises into the sky, beginning down below as an abstract form and ultimately turning into a sharply defined figure. The base of the piece is a small building, behind which a full moon is visible.  “Crow Mother” is a delightful composition that was executed with incredible skill.

Kim Seyesnem Obrzut is a Hopi Pueblo sculptor.  Obrzut studied fine art and sculpture at Northern Arizona University, and has now been casting bronze for over 35 years.  According to her website, she is one of the first Native American women to work in the medium of bronze.  Obrzut and her works have been featured in multiple books and national publications.