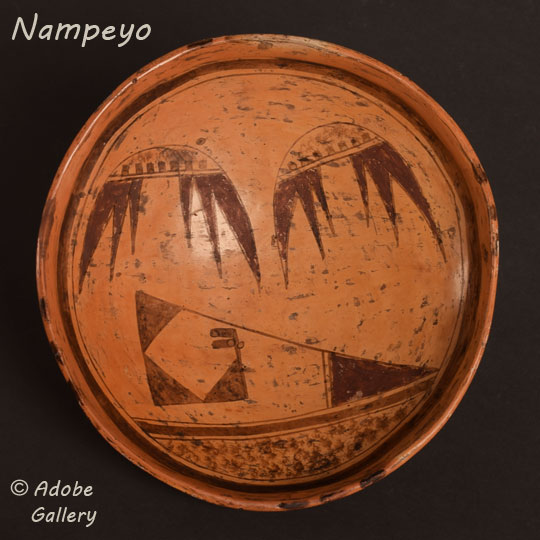 This bowl was made by Hopi-Tewa matriarch Nampeyo of Hano. Its shape is that which we'd expect of a Nampeyo piece, with the signature raised lip on the interior rim. It leans just a bit to one side, which could be corrected with a bit of putty if one chooses to do so. We choose not to, as we appreciate the elegant but imperfect nature of historic pieces like this.

Nampeyo's excellent designs cover much of the bowl's interior. A pair of lines, one thick and one thin, circles the bowl just below the interior lip. One large triangular form lays across the interior, while a wonderful pair of identical designs appear nearby. The viewer will see a variety of things in these forms as they rotate the bowl and explore its expressive patterns.

The bowl has a beautiful orange slip, which is notably consistent on the interior. On the exterior, it varies beautifully from orange to white. A black fire cloud stretches out across one side. An unusual wear pattern covers most of the bowl in small abrasions, which penetrate the slip slightly and appear as tiny lines and patches of gray and black.

Nampeyo of Hano (1857-1942) was a widely influential potter who lived and worked on the Hopi Reservation in Arizona. Nampeyo is regarded today as one of the finest Hopi potters and one of the most important figures in Native American pottery. Her work is displayed in museums and collections around the world. Nampeyo was taught how to make pottery by her grandmother and began earning an income as a potter while she was still just a teenager. Less interested in innovation than perfection, Nampeyo took an early interest in the design and form of ancient Hopi pottery, which she believed to be superior to the pottery being created by her contemporaries. She visited the ruins of ancient villages and copied designs from pieces of prehistoric and protohistoric pottery onto paper, then reproduced the designs on her own vessels.

Condition: A pattern of slip abrasions covers much of the bowl, becoming heavier around the exterior base. Thin slip cracks around the rim.