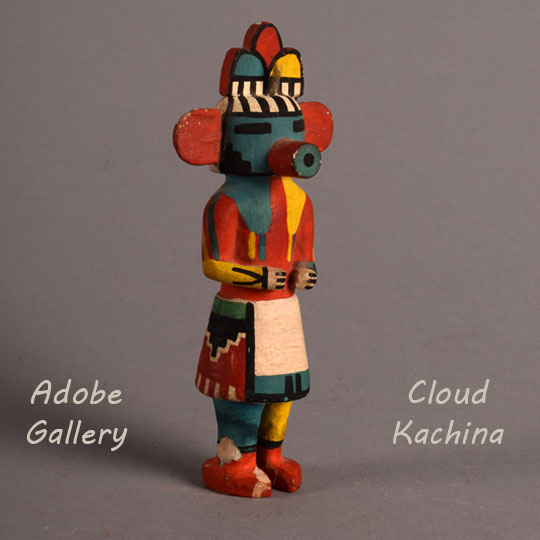 This carving is of Omau-u Katsina.  He is the old-style Cloud Kachina.  He is an all-wood carving with traditional paints.  According to Barton Wright “The Omau-u Kachina formerly appeared in the Mixed Dances.  For some reason this kachina has dropped in popularity since the early part of this (twentieth) century and is now virtually unknown.  The doll appears only in the older collections.  It appears to have been a kachina representing clouds in general and its form was widely variable.”  Wright 1977:64

“The Hopi employ a number of kachinas for cloud spirits as their interest is always in the production of moisture whether as rain or snow.  It is consequently not surprising to find kachinas which range from the simple Thunder-Making Kachinas to the far more complex Shalakos.  Because virtually every kachina who dances is in one way or another a rain-bringing spirit in addition to its other attributes, many are not singled out as rain spirits.” ibid 59

Provenance: this Hopi Pueblo Omau-u Katsina, Cloud Kachina Doll is from the extensive collection of a client from California