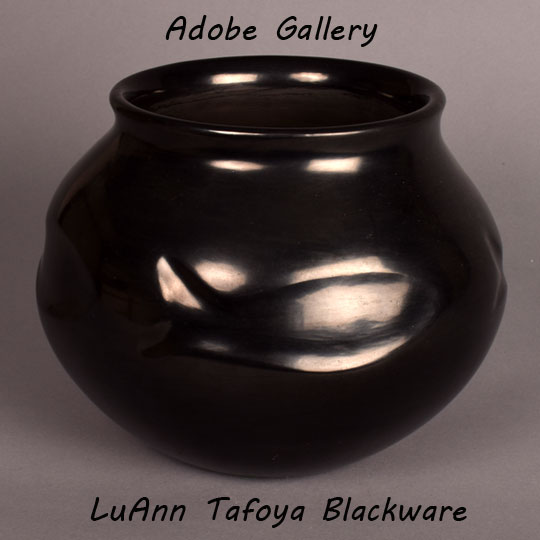 This most unique pueblo pottery jar, made by Santa Clara Pueblo artist LuAnn Tafoya, features four fish floating around the mid body.  They are perhaps whales, rather than fish, but the point is made that they are ocean-going inhabitants. The globular jar is perfectly stone polished with a high sheen.  The designs are subtle and unobtrusive on the vessel’s lovely shape. The jar is signed LuAnn Tafoya, Santa Clara Pue., NM and was made around 1983

LuAnn Tafoya (1938- ) is a talented Santa Clara Pueblo potter. She comes from the Tafoya family.  Her grandmother, Sara Fina Tafoya, was a masterful potter as was LuAnn’s mother, Margaret Tafoya.   Margaret, in turn, passed on this artistic gene to nine children and numerous grandchildren.

LuAnn certainly inherited the talent to produce beautifully sculpted jars with outrageously burnished surfaces. She has made jars almost three feet tall—a feat not easily accomplished. She has received many notable awards and a great deal of recognition for her efforts.