Katsina dolls-colorful, elaborately decorated cottonwood carvings of Native American spirit beings-are more than beautiful works of art. They are educational tools created to teach young Hopi Indian women about their religion. By studying and collecting authentic Katsina dolls, outsiders are allowed and encouraged to learn about the rich cosmology of the Hopi people.

Adobe Gallery's new exhibit "Rare and Remarkable Katsina Dolls" opened February 2, 2018. "Rare and Remarkable Katsina Dolls" features authentic Hopi Katsina dolls, the majority of which were completed in the traditional style. The exhibit, which includes contemporary Hopi pieces and a select few pieces from Zuni Pueblo and Katsina imagery in other art forms, has been exteded and will continue through July. 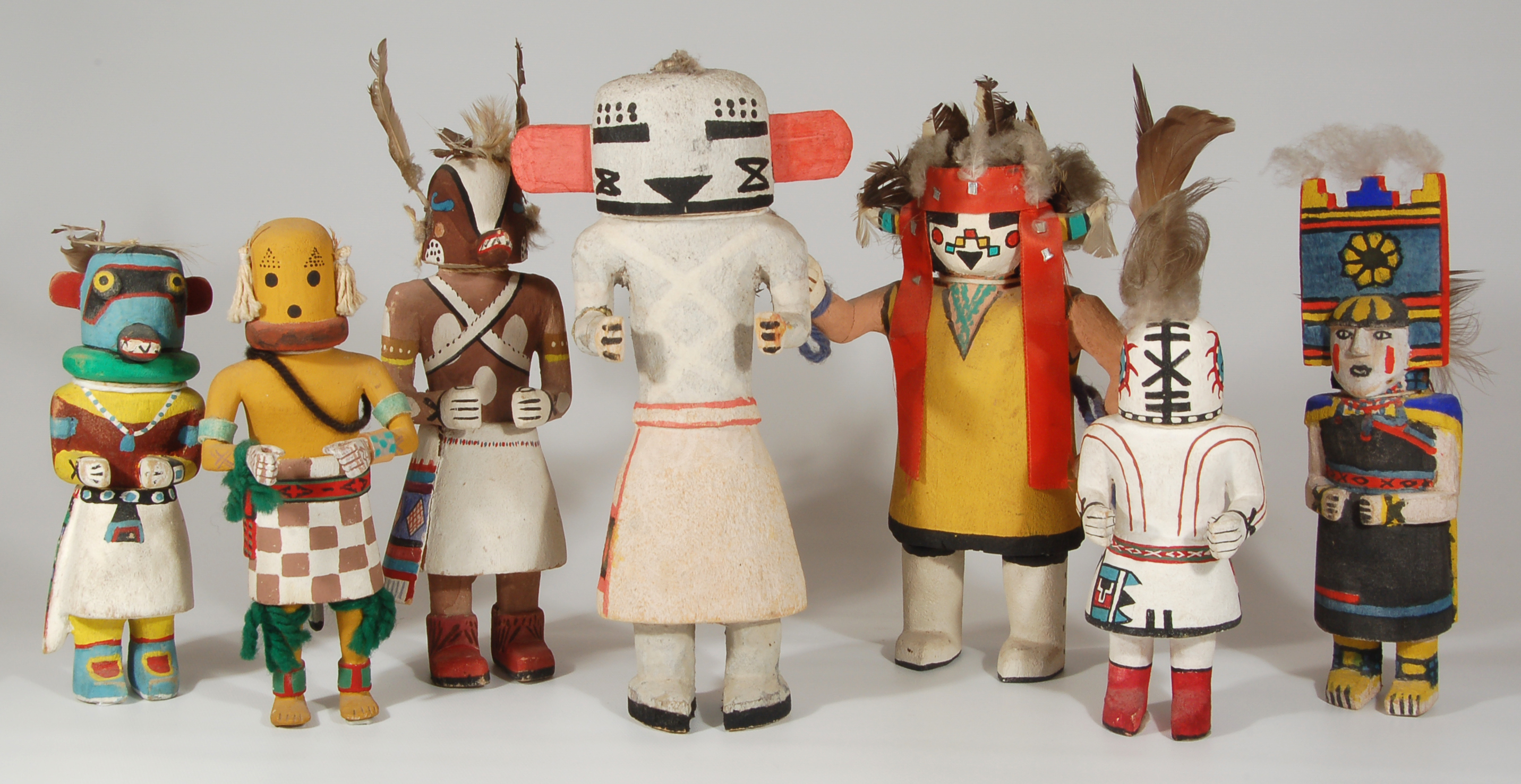 Exactly when Katsina (or “Kachina” to non-Hopi people) dolls began to be created is unknown. Though the earliest documented examples date to the middle of the 19th century, it is likely that they have existed for hundreds of years.   The Katsina dolls with which Southwestern art collectors are most familiar are those made and sold by the Hopi Indians of Arizona.  The word “Katsina” itself is usually used in reference to a Hopi spiritual being.  These spirits can represent anything or anyone in the natural world or cosmos, including resources, deceased ancestors, spiritual concepts, and natural phenomena. They are summoned and embodied by Hopi men during ceremonial dances.  Katsina dolls are made and given to young Hopi women to teach them about the dancers and, more importantly, the spirits represented by the dancers.  The dances and the Katsinam are sacred to the Hopi people.  The dolls themselves are educational tools with little spiritual significance, and so can be purchased and owned by outsiders.

With education being their primary purpose, Katsina dolls are created with great care.  They are carved from the root of the cottonwood tree, painted, and adorned with feathers and various other materials.  The root—the source of nourishment for the tree—provides life to the Katsina doll.  Dolls that are damaged during carving are never destroyed or thrown away.  They are put away safely because their lives have already begun.

Zuni Pueblo is the sole New Mexico Pueblo that permits its Katsina dolls to be sold on the open market, possibly because of their close connection to the Hopi people.  Over a hundred years ago, a severe drought forced many of the Hopi people to migrate to Zuni.  When the Hopi returned to their villages about 30 years later, they brought with them many Zuni customs.  The Zuni adopted many Hopi customs.  Even today, the Zuni people have more in common with the Hopi people than they do with neighboring New Mexico Pueblos. 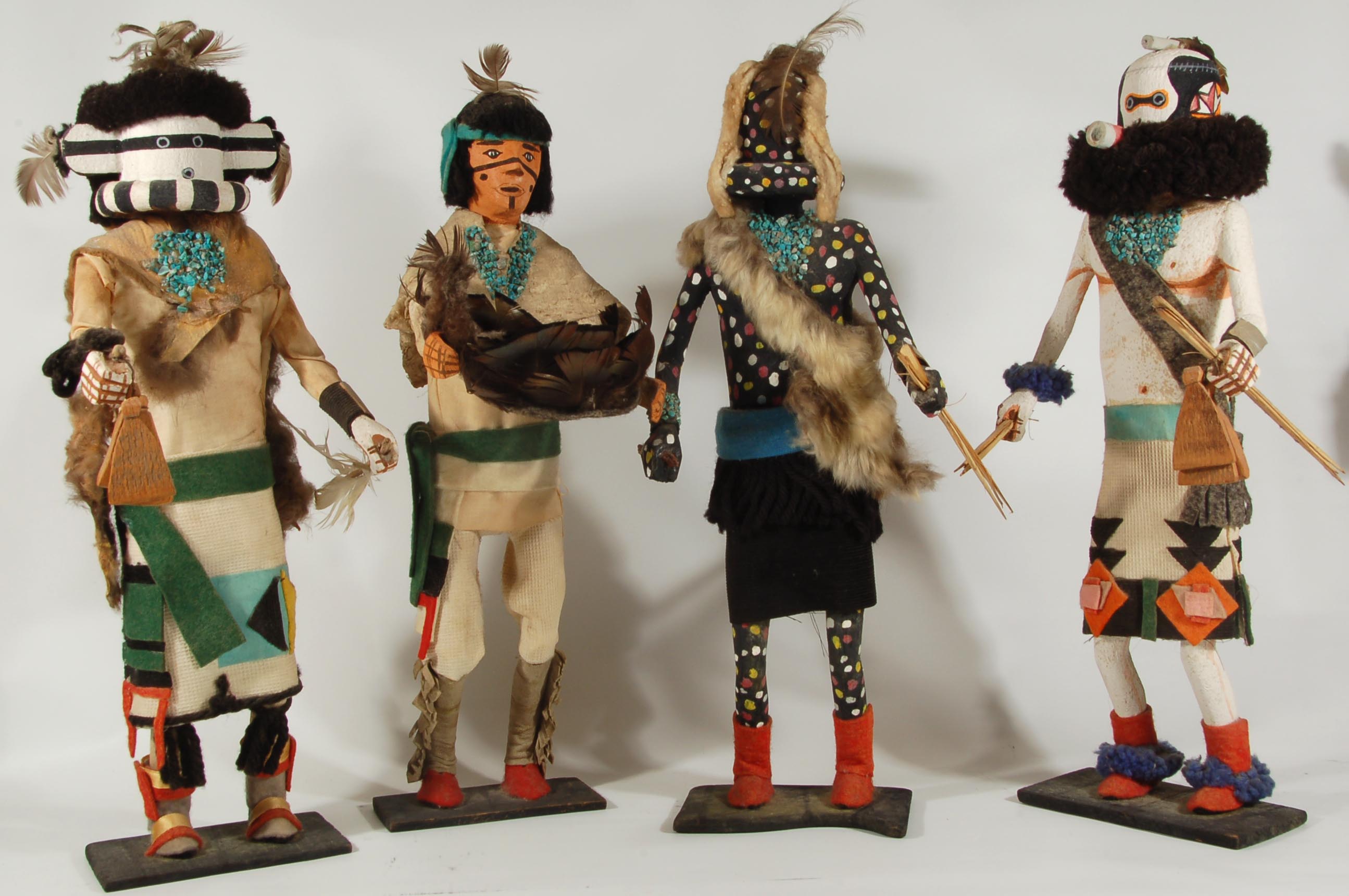 Despite their similar purpose and their peoples’ cross-cultural influence, Zuni and Hopi katsina doll carvers create works that differ greatly.  Hopi carvers focus most attentively on the carvings themselves, which are later decorated with paints.  Zuni carvings are less intricate.  Zuni artists devote their time and energy to creating elaborate clothing and jewelry for their simpler carvings.  This may be because the Catholics—who created clothed carvings of their saints—were much more influential at Zuni than at Hopi.

Navajo-made katsina dolls exist, too, but are not created for the same purposes as Hopi and Zuni dolls.  The Navajo religion does not include Katsinam.  These Navajo dolls are made to look like and pass as Hopi katsina dolls, but they very rarely do.  They are inaccurate representations and are not considered authentic or desirable by serious collectors of katsina dolls.

This exhibit focuses on katsina dolls that are rare, remarkable, and most importantly, authentic. The majority of these works are Hopi dolls that were, at some point, presented to Hopi women in conjunction with Katsina dances.  They were hung on the rafters and walls of their owners’ homes with twisted string, which symbolizes lightning.  The exhibit also includes a selection of Zuni dolls and contemporary, free-standing Hopi carvings. 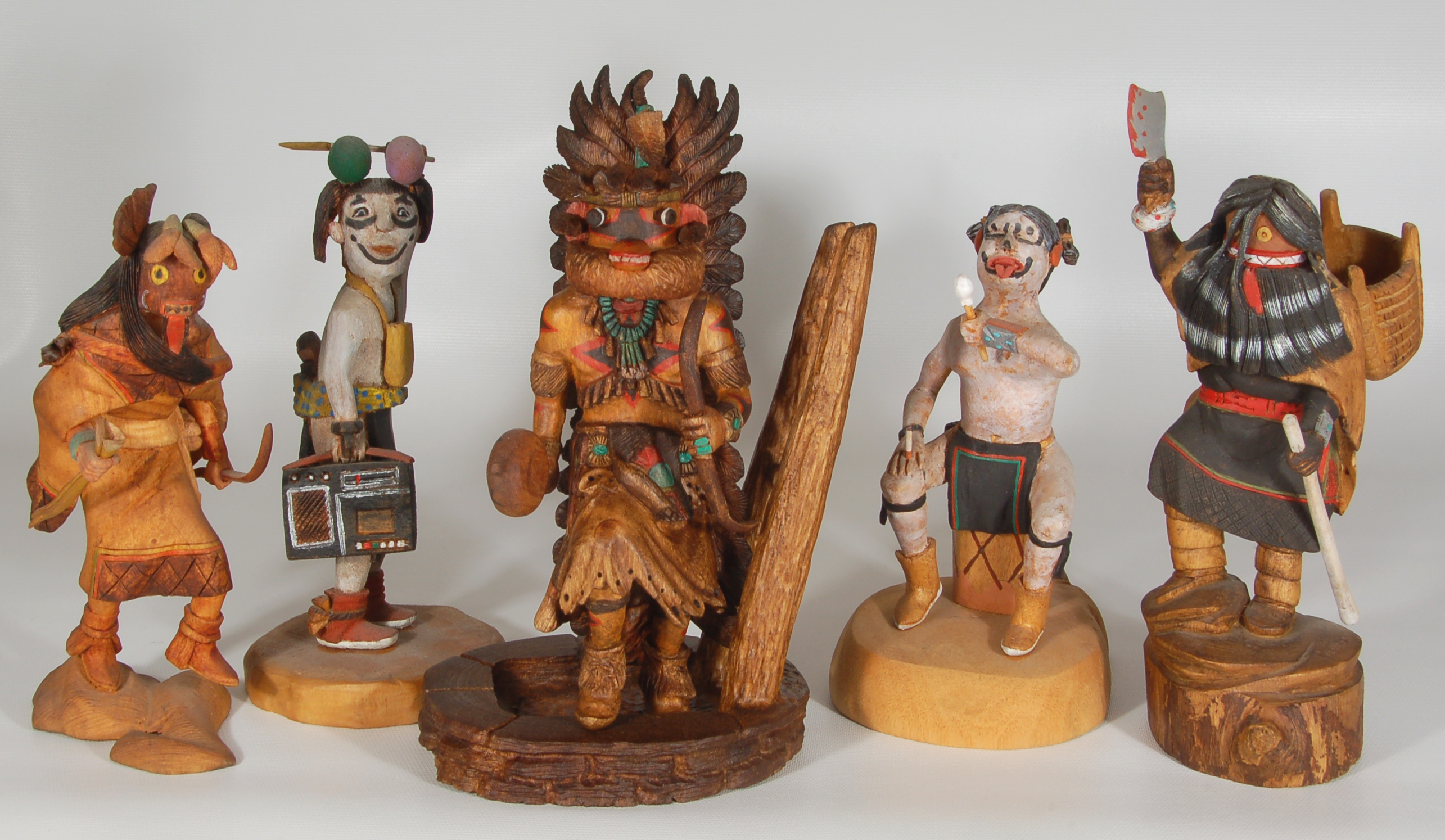