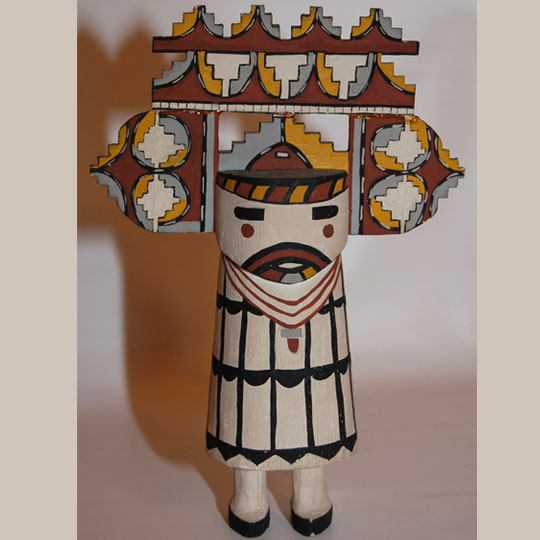 The Hopi Salako Ceremony is held infrequently and is therefore one of the least known of the Hopi Pueblo ceremonies. According to Barton Wright, the last known one on Third Mesa was held in 1912, and the last one on Second Mesa was held in 1972. I attended the ceremony at the village of Shungopavi on Second Mesa around 1985, but I do not recall the exact year. It was held following another ceremony and I was about ready to leave the plaza when this ceremony started. It was a most impressive ceremony.

The ceremony featured Salakotaka, Salakomana, Eototo, Hahai-i-Wuhti, Sotuknongu, Tukwinong, Tukwinongmana, and Tangik’china Katsinas. I was told that the purpose was for the benefit of all mankind, not just for the benefit of the Hopi, and, of course, was to bring rain as all Katsina ceremonies do. It actually rained shortly following the conclusion of the ceremony and I was duly impressed.

The Salakomana is the sister of the Salakotaka and they always appear as a pair. The female wears white moccasins and the male wears turquoise moccasins. This katsina doll is that of the Salakomana. It dates to the 1950s and is not signed by the carver. It is in very good condition but a small amount of glue is visible on its tableta.

Provenance: from the estate of a gentleman who worked for the U. S. Department of the Interior and who passed away in 1964.

Reference: Kachinas: a Hopi Artist’s Documentary by Barton Wright with original paintings by Clifford Bahnimptewa.  This out-of-print book is currently not available from Adobe Gallery.