+Add origin to My Preferences
Southwest Indian Hopi Pueblo Pottery and Fine Art
The Hopi have lived on three mesas in northeastern Arizona for more than 1,000 years. Today they live in 12 separate villages on or below the three Mesas. The Hopi language is part of the Uto-Aztecan language group, one of the largest Native American Language groups. On First Mesa, a group of relative newcomers from the Rio Grande Tewa Pueblos speak the Tewa Language. One of these Hopi-Tewas is the famous potter Nampeyo. Along with her daughters Fannie Nampeyo, Nellie Douma and Annie Healing, she created some of the most beautiful pottery made at the time. The name Hopi is a shortened form of the Hopi word for themselves: Hopituh Shi-nu-mu ("The Peaceful People" or "Peaceful Little Ones"). The Hopi Dictionary gives the primary meaning of the word "Hopi" as: "behaving one, one who is mannered, civilized, peaceable, polite, who adheres to the Hopi way."  Traditionally the Hopi are highly skilled farmers.  They grow corn, beans, squash and melons. The Hopi also participate in the wider cash economy; a significant number of Hopi have mainstream jobs; others earn a living by creating high-quality Hopi art, notably the carving of Kachina dolls, the expert crafting of pottery, and the design and production of fine jewelry, especially sterling silver.  Adobe Gallery features examples of fine Hopi pottery from the Nampeyo family as well as other Hopi potters. We carry Katsina carvings from carvers such as Otto Pentewa and Jimmy Kootshongsie as well as work by modern carver Kevin Pochoema.  We also feature coiled baskets from Second Mesa and wicker plaques from First Mesa, fine silver overlay jewelry and paintings. 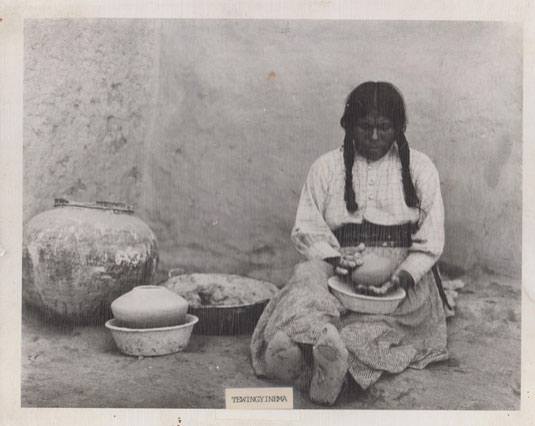 Above Image: This potter was staged by an unknown photographer at an unknown date.  The Hopi Pueblo potter is identified as Tewingyinema.  We are appreciative to Hopi-Tewa potter, Mark Tahbo, for sharing this photograph with us.  The photograph was recently found in a burned out home at First Mesa.