Note that you can also view expired Special Exhibits and Shows: a great reference/research tool and another chance to see those old shows again. 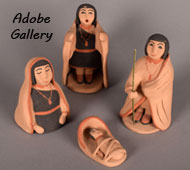 November 01, 2021 until January 07, 2022"Nacimiento" is the Spanish word for nativity scene or crèche. This art form has been popular in Europe since the fifteenth century. The first known Native American-made nativities appeared in the late 1950s. In 1961, the International Museum of Folk Art exhibited the extensive nativity scene collection of Alexander Girard, which included two Native sets. The exhibit increased interest in the art form, encouraging Native artists to create their own works. By the 1970s, artists from a variety of tribes were creating and selling Nacimientos. Today, the sets are widely appreciated and enthusiastically collected.

This show has started. View more details on the show.