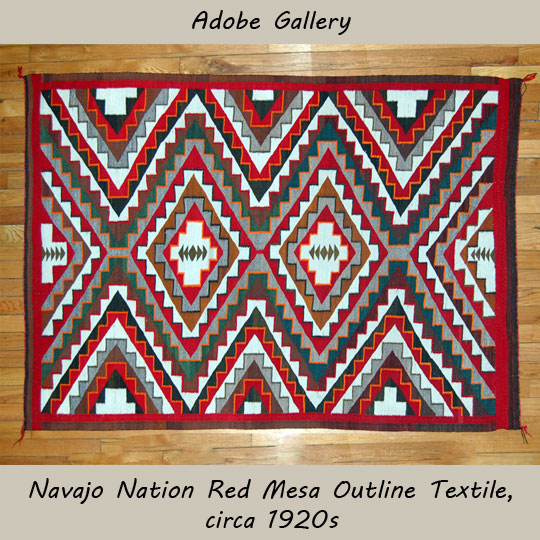 This textile originated in the Red Mesa area of the Navajo Reservation.  It is described as a “Red Mesa Outline” rug because of the thin lines of yarn that outline the division between the bands of color.  It dates to the 1920s, the classic period of twentieth-century textiles.  It is thought that the outlining in these textiles is a direct outgrowth from the earlier period of “eyedazzler” rugs.  The colors contribute to the eyedazzler appearance—shades of brown, red, white, orange, gray, and green.

The outer border is dark brown wool, and the inner border is red.  Interestingly, the red border penetrates the brown border on all four corners—the weaver’s pathway, or ceremonial line break.  The overall pattern is that of triangles and diamonds formed of stepped bands of color.  From the centerline of the textile, the pattern is a mirror image of the two halves.

Red Mesa Trading Post is fifteen miles west of Teec Nos Pos in the Four Corners area (New Mexico, Colorado, Arizona, Utah).  Weavers there are known as some of the best on the Navajo reservation.  The designs used were influenced by surrounding weaving areas—use of multiple colors from Teec Nos Pos, and outlining from earlier eyedazzler textiles.  It was the artistic talent of the weavers of Red Mesa to combine these borrowed design ideas into the beautiful result of a Red Mesa Outline Rug, the distinctive style associated with the region.

Provenance: this Navajo Nation Red Mesa Outline Textile, circa 1920s, is from the collection of a Santa Fe resident since 2004

Recommended Reading: THE NAVAJO WEAVING TRADITION 1650 to the Present by Alice Kaufman and Christopher Selser Weaving a World: Textiles and the Navajo Way of Seeing [SOLD]
by Roseann Willink and Paul Zolbrod