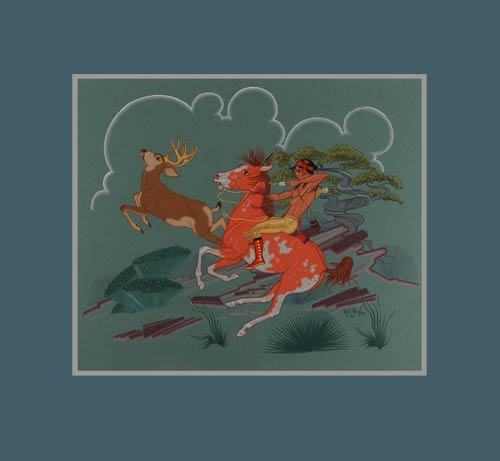 Born in 1926, Charles Lee (Yel-Ha-Yah) developed a fascination with horses. His Indian name, which means “Warrior Who Came Out” in Diné (Navajo), was given by his grandmother. In his senior year of high school, he was sent to attend the Santa Fe Indian School. Later, he met Navajo artist Harrison Begay, who greatly influenced his work. He preferred to focus on one subject in his pieces, but sometimes, he would incorporate more. It wasn’t until later in his life that he chose to make his work more realistic. In her book, Southwest Indian Painting: A Changing Art, Clara Lee Tanner says that Lee “combined the reality of his life with his imagination…” in his paintings. In the 1960s, Lee began to combine three to four animals in one painting. By 1948, he had reached the pinnacle of his style. Lee later became a missionary to his own people on the Navajo Reservation.

This piece depicts a young Navajo warrior on horseback in the dramatic moment of shooting a deer with his bow and arrow. The gentle, but bold, color scheme helps to soften the intensity of the painting’s subject matter.

Condition: The painting is in original excellent condition. It has never been framed and is currently shrink-wrapped for protection. It is signed and dated 1962 in lower right.

Provenance: From the collection of the family of Balcomb’s Ranch Gallery, Colorado.