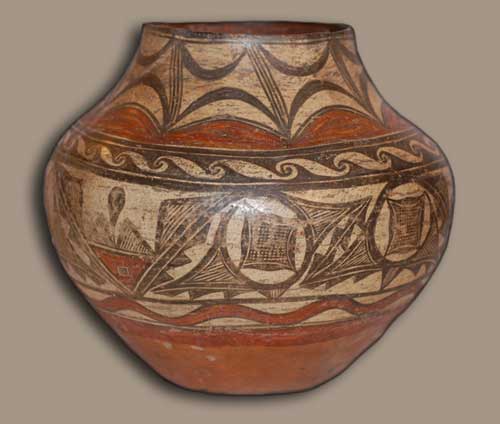 This is absolutely a superb polychrome jar, created most probably between 1890 and 1910. This extraordinary vessel was coil-formed from native clay with the addition of traditional Zia paste temper, crushed basaltic lava. The concave base and underbody are stone-polished bare paste with a red band at the top of the underbody, with the neck interior red slipped with a black rim.

The potter divided the design field into horizontal bands—one above the other. A wide band of design encircles the neck, a thin one at the shoulder, an even wider one around the main body, and a final thin band at the base.

The lowest design band is a simple polished red undulating serpentine-like element resting on double framing lines. Above this is the main body design that consists of spiral elements filled with black parallel fine lines. In the center of each spiral sits a diamond shape box with cross hachuring lines. The spirals are arranged in pairs, with each pair being separated by a red inverted triangle with a black eye in its center.

The shoulder design is a one-inch wide black band with reverse cream colored interlocking spirals. Above the shoulder is the neck design consisting of arches in various forms—the lower series being filled in with stone-polished red arches, above which are beige background arches topped by black arches over which are inverted black arches.

The overall impact of this jar is that it is an artistic masterpiece. The care and expertise with which the design was painted on the jar is testament to an artisan who was expert at designing and painting and one who was proud of her work.