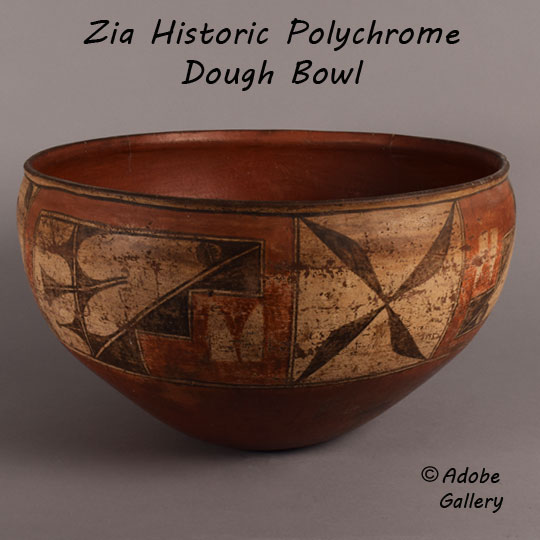 It is believed that dough bowls were not made at Zia before 1780. Dough bowls of the late 1800s, like this excellent example, feature decorations developed directly from water jars. Generally, the body designs are placed in wide panels, which are bisected by orange bars. The large panels around the bowl are then separated by smaller square panels containing a different design concept—an X across the box with heart-shapes and triangles divided by arrowheads. This bowl exhibits all those traits beautifully.

This bowl appears to date to circa 1890-1910. Its age and its history of use are evident, as the exterior slip is lightly and consistently abraded, and the interior is darkened and smooth. The bowl is beautifully patinated, with a rich, dark look that will appeal to many historic pottery collectors. The patina's visual effects are further enhanced by the pattern of light abrasions that appears around the rim.

While its design and patina are noteworthy, the bowl's strongest attribute is one that might not be immediately noticeable to all viewers: its shape is exceptional. At over ten inches by over seventeen inches, this is a large bowl, and it is rare to see one of this size that is so well balanced. From any angle, its rim runs almost perfectly parallel with the surface on which the bowl sits. Its curved sides are nearly symmetrical from most angles, and the interior looks pleasantly and evenly rounded. This is a remarkable accomplishment for a piece of this size. Compare this bowl to similarly sized dough bowls of the era and you'll find very few that match the quality and elegance seen here. This is an outstanding example of historic Zia Pueblo pottery.

Condition: good considering its age and the fact that it was used. Three vertical cracks appear; each has been stabilized by a professional restoration artist. A previous owner stabilized the bowl using a band of duct tape around the rim. The tape and its residue have been removed, but a darkened band is visible.

Provenance: from a gentleman in Taos, New Mexico