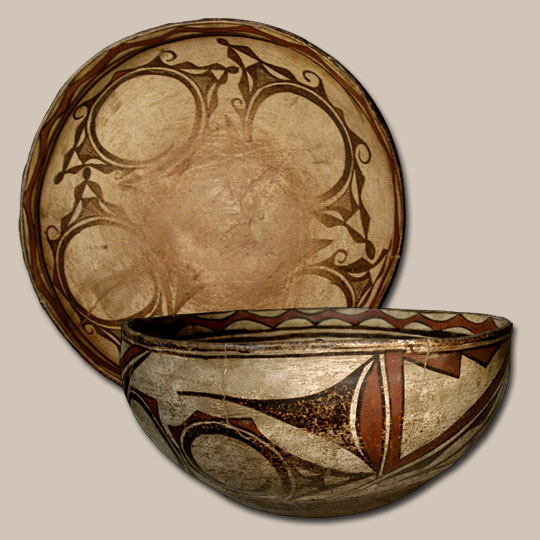 The majority of Zuni dough bowls seem to be 14 inches or less in diameter. Rarely do we see ones larger. That seems to be the standard for most of the ones from Zuni Pueblo. This one, however, is 16 inches in diameter.

It dates to the last quarter of the nineteenth century. The paste materials are typically Zuni; white and chunky in texture with the centuries old temper material of ground pottery shards. The use of old shards for temper evidences the regard of the pueblo peoples for the old works made by their predecessors. To add these remnants to the new work is a sign of respect.

The rim of the bowl is slightly indented from the exterior and has a distinctive inward curve on the interior, imparting a graceful shape to the bowl. The flexure of the interior of the rim flexes is a feature that seems to be standard on Zuni bowls.

The bowl is slipped in traditional fashion with cream-colored clay, over which is painted the design in mineral and vegetal paints. The underbody is slipped in black, a tradition starting in the mid-1860s and continued to today. The exterior is decorated with traditional Zuni volutes that are an early portrayal of the Rainbird.

The interior decoration begins with a brown rim below which is a wave-like element encircling the bowl that is painted red and outlined in brown. Below this are two wide parallel framing lines with a ceremonial break. Traditional Zuni volute design Rainbird elements fill the interior of the bowl down to the bottom, which then has a red element that appears as a four-pointed star.

During a burglary of my home in the 1990s, this bowl was taken along with everything else. When we recovered the entire collection, a week later, a section of this bowl was broken out. Fortunately it was recovered as well. The broken piece was professionally replaced.

Collection Provenance: Edna Norton, who used to work in the pottery room of The Covered Wagon in Albuquerque's Old Town called me on the evening of June 23, 1983 and said a man was at her house with some pottery and she thought I should come over and take a look at it. When I got there, it was all Historic pottery and I had never purchased any before. I had no idea what to offer for the 12 or so pieces. I made an offer and it was accepted. This purchase is what launched me into collecting-and later specializing in- historic pottery. I have retained the bowl in my collection since that time.