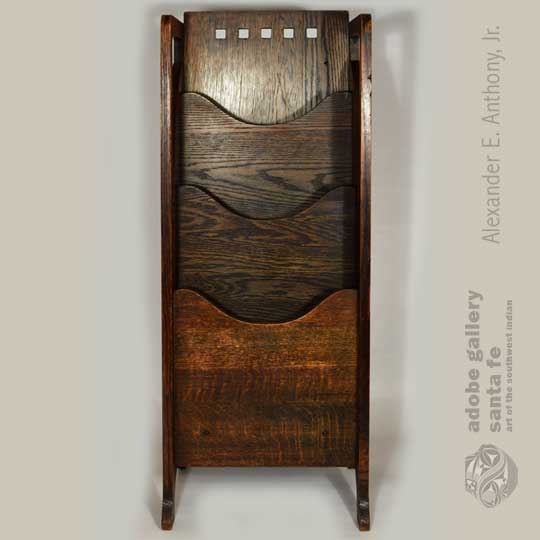 In October 1910, at the age of 61, Fred Albert Dennett (1849-1920) launched The Lakeside Craft Shops in a new factory to be constructed in Sheboygan, Wisconsin. The company was to produce furniture and home furnishings including "many articles not generally produced." Dennett tapped his son-in-law, Edward J. Barrett, to manage the day-to-day operations. Dennett doubtless chose the name "The Lakeside Craft Shops" for the illusion it suggested of a band of contented craftsman producing artistic, hand-made products for the home. By 1910, there were hundreds of furniture companies throughout the country manufacturing Arts and Crafts furniture of varying quality. It was therefore very risky for Dennett to enter this crowded marketplace with his own line of Arts and Crafts furniture and furnishings. Nevertheless, The Lakeside Craft Shops began production in 1912... and business was good.

The Lakeside Craft Shops specialized in small pieces of furniture, such as cellarettes, footstools, and umbrella stands, and even smaller home furnishings, such as fern dishes, bookends, and serving trays. The company's 1912 catalogue shows over 300 items in its eighty-six pages.

Sheboygan was a good choice for the home of The Lakeside Craft Shops. Sheboygan was close to sources of lumber and close to markets. Moreover, Sheboygan offered a large pool of experienced furniture workers. Sheboygan already was home to dozens of furniture manufacturers, and long before The Lakeside Craft Shops was established, the city enjoyed the nickname the "Chair City." (Courtesy of The Journal of Antiques and Collectibles)

This tall magazine stand was crafted with a keen sense of design. Standing upright and facing forward, magazines are viewable at a glance. The piece was obviously construed in the finest detail. The five small square cut-outs on the back are like those seen in numerous Arts & Crafts furniture pieces. The magazine stand does not display the mark of the maker but is well documented as a product of The Lakeside Craft Shops, circa 1915.

Provenance: from a resident of Santa Fe

Arts and Crafts Furniture: Shop of the Crafters at Cincinnati (Mission Furniture Catalogues Series, No 7)(SOLD)
by Stephen Gray