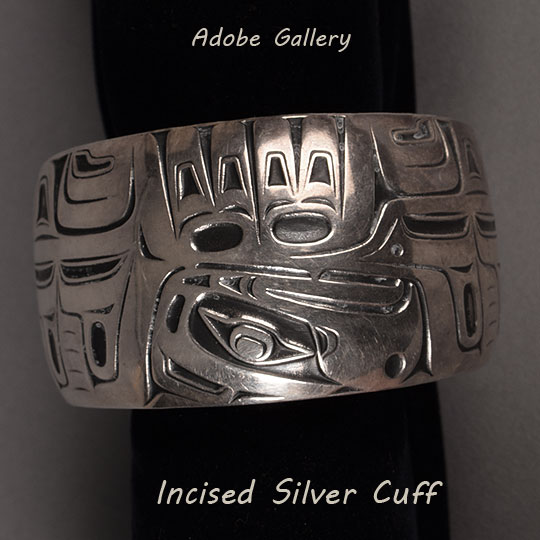 The artist of this bracelet spent many years studying the tribes of the Northwest coast of America and was inspired to create pieces of art in reflection.  This silver cuff is convex, rising off the wrist as it curves around the arm.  It is also thicker on the top of the arm and becomes less broad as it moves to the underside of the wrist.  A small opening can be expanded to one inch without damaging the cuff.  Northwestern totem content has been evenly incised across the face of this bracelet and is the unique theme that sets this piece apart.

Herem was born in Michigan but raised in Portland, Oregon. He lived in Seattle from 1964 to 2007, and now resides in Everett. He studied at Portland State University, Brigham Young University, University of Washington, and University of Edinburgh, Scotland. His work is influenced by ethnographic fieldwork among the native people of Southeastern Alaska in a study funded by Sealaska Corporation of Juneau, Alaska. This resulted in a published 850-page landmark study titled “Historic Site Survey of Southeast Alaskan Grave and Village Sites,” that was edited and written by Herem.  [Western Washington University]

Condition: This bracelet is in excellent condition Songs of the Totem [SOLD]
by Carol Davis

Sculpture From the Collection of George Terasaki [SOLD]
by