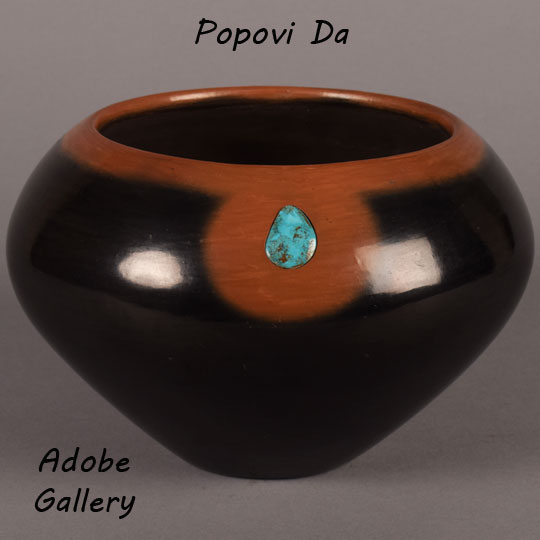 This gorgeous jar was made in 1970 by Popovi Da of San Ildefonso Pueblo.  The black and sienna style seen here, which is the result of a difficult two-step firing method, was created by Popovi himself in the 1960s.  During this period, he also revived polychrome wares and created the metallic “gunmetal” style.  Popovi was an innovative artist, and these groundbreaking works have aged well in the years since his passing.

This piece is one of the finest examples of Popovi’s black and sienna style that we’ve had the pleasure of handling.  Its low, wide shape, with a rim that curves inward, is immensely appealing.  It nods to traditional pueblo wares in more ways than one, but overall, it conveys a forward-thinking modern feel.  The rim’s diameter is just a few inches smaller than that of the jar’s midsection, which means that the jar’s opening is a wide one.  This invites the viewer to inspect the jar’s unadorned interior, which is beautiful in its relative simplicity.

On the exterior, Popovi displayed his technical mastery by setting two large turquoise stones on opposite sides of the jar and surrounding them with circular bursts of sienna.  These circles join a sienna band, which circles around the jar’s rim.  The tone here is gorgeous, and Popovi’s restrained application makes it even more effective. The traditional polished black surrounds the three sienna circles, covering the majority of the jar in a highly reflective finish.  This is an exceptionally beautiful piece of pueblo pottery, and a rare one, too.  Fortunately for those who appreciate this style, Popovi’s son Tony carried on the challenging black and sienna pottery style and was similarly successful in his execution as is seen in our item # C4560B. Provenance: this Popovi Da Black and Sienna Jar with Two Turquoise Stones is from a private New Mexico collection