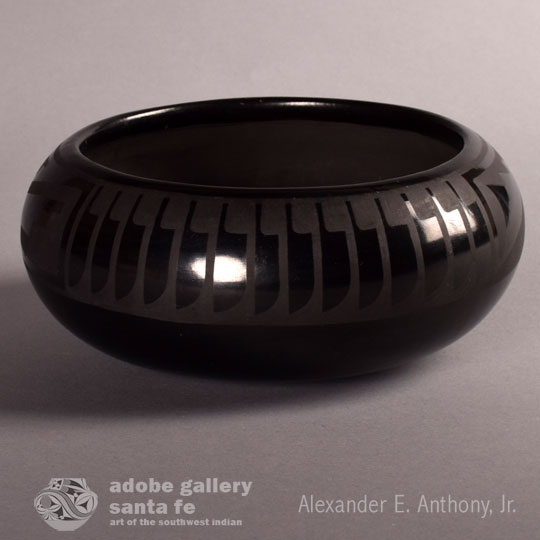 This is a very traditional early Black-on-Black Pottery Bowl by Maria Martinez and her son Popovi Da.  The exterior of the gracefully curving wall of the bowl was painted with feather designs adjacent to a diagonal and abstract bird design.  Both designs are repeated once. This bowl is co-signed Maria/Popovi and does not have a date so it was made in the period before Popovi added dates— between 1956-1959.

Popovi Da began collaborating with his mother, Maria Martinez, on her pottery in 1956, following a period when Santana (married to his brother, Adam) had been assisting her mother-in-law.  Popovi and his mom worked together until his death in 1971. Popovi worked with Maria in all aspects of pottery preparation and their pieces were co-signed. When Popovi passed away, Maria essentially retired. Popovi initiated the process of adding the date to his and Maria’s pottery in 1959. Prior to that, they were just co-signed with the two names, as in this bowl.

Condition: structurally in excellent condition with abrasions on the underside.