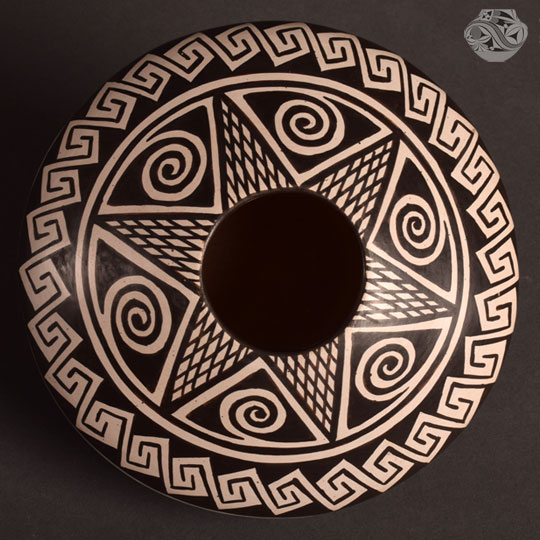 Helen Naha, Feather Woman, developed this distinctive design in strong black-over-white pigments and it has become one of her distinguishing Hopi Pueblo pottery trademarks.  The white slip has been carefully polished in the style for which she was known. The jar has a dynamic energy from the designs she applied. There is motion in the spirals and lightning on the underside.  A six-pointed star emerges from the opening and each arm of the star is separated by a spiral enclosed in a white triangle. Around the shoulder is a continuous chain of hooked elements. The lower portion of the jar is a mixture of spirals, lightning, and another six-pointed star. This Black-on-white Hopi Pueblo Pottery Jar by Helen Naha, Feather Woman is signed on the bottom with her hallmark feather glyph.

Helen Naha (1922-1993) Feather Woman was a member of the Spider Clan at Hopi Pueblo. She was the daughter-in-law of Paqua Naha (the first Frog Woman). She was married to Paqua’s son, Archie. At first, she followed the style of her mother-in-law and her sister-in-law, Joy Navasie. She eventually developed her own distinctive style, using black and red paint on a white slip to create bold designs. Often, she would take the effort and time to polish the inside of a pot as well as the outside.   Both of her daughters, Sylvia and Rainy, as well as her granddaughter, Tyra Naha, have followed in her footsteps.

Condition: The seed jar is in original excellent condition. There is minor wear on the bottom but the signature is in undisturbed condition.

Provenance: from a client in Illinois who purchased it directly from the artist.