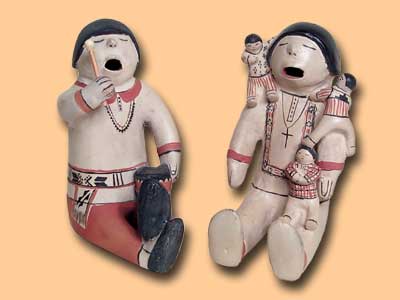 Storyteller figurines are a relatively recent development in pueblo pottery. Based on a long history of figurative pottery production at Cochiti Pueblo, a single potter - Helen Cordero - created a male figurine with numbers of children climbing all over him, and called it a storyteller. That was in 1964. Today, hundreds of potters produce thousands of similar figures which they call storytellers.

Helen Cordero intended the storyteller to be a likeness of her grandfather, therefore she only made male storyteller figurines. Most other potters today make female figurines.