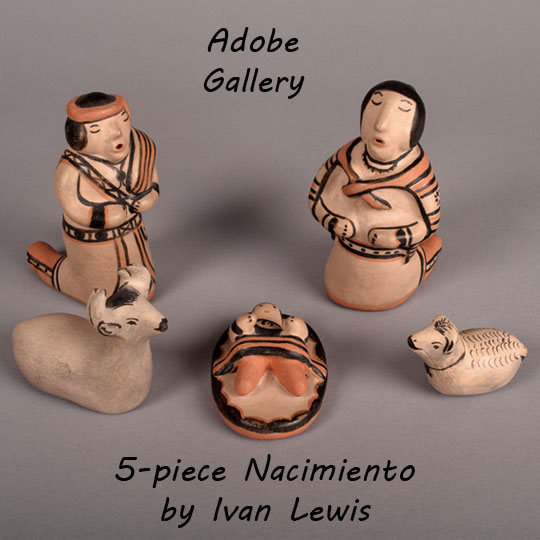 According to our historic records, we have not previously had a Nacimiento by Cochiti Pueblo artist Ivan Lewis, at least not in the last 20 years since Adobe Gallery relocated its gallery to Santa Fe.  This pottery nativity set consists of the Holy Family and two animals.

Mary dominates Joseph by a half inch.  She is kneeling and has a beautiful blanket wrapped around her that is decorated with stripes and flowers.  She has her eyes closed and mouth open.  She is wearing a nugget necklace.

Ivan Lewis was the son of famous Acoma Pueblo potter Lucy M. Lewis. He never made pottery while living at Acoma, only started making it after marrying Rita Banada and moving to her Pueblo of Cochiti.

Ivan (1919-2001) and Rita (1920-1991) Lewis were married in 1944 while he was serving in the military.  Upon returning from military service, he moved to Cochiti Pueblo where he spent the remainder of his life.  Ivan began making pottery in the Cochiti style around 1977, following twelve years of working on the Cochiti Dam.  His specialty was pottery figurines, especially cowboys.  It is a treat to have our first Nacimiento of his.

Condition: this Cochiti Pueblo 5-piece Nacimiento by Ivan Lewis is in original condition.