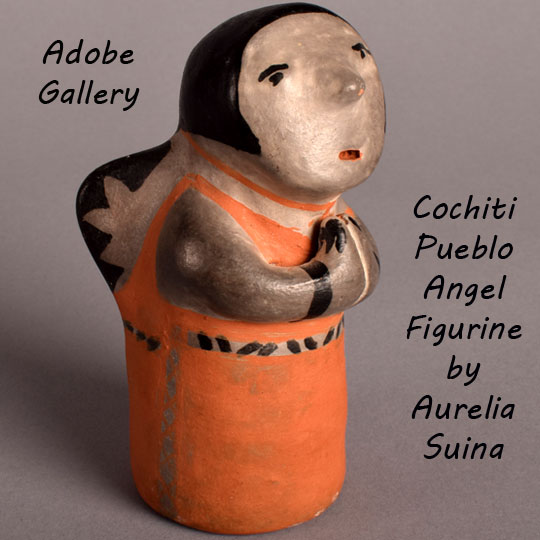 This pottery angel figurine, made by Cochiti Pueblo artist Aurelia Suina, displays a pensive look, with eyes open, hands clasped, and a pair of wings on her back.  She wears a pueblo-style dress that is over one shoulder and under the other one, and she is wearing a belt.  She has deep black shiny hair and the figure fired to a slightly smoky finish which emphasizes an older style. Aurelia Suina (1911 - 1997) has always produced pottery of the finest quality. Her figurines, such as this angel, possess a patina related to figurines of the 19th century. Collectors actively look for her pottery. Her work is part of several museum collections and was included in the Albuquerque Museum exhibit, "One Space: Three Visions" in 1979.

Figurine pottery has always been a tradition among the pottery-producing tribes. Cochiti Pueblo has always been at the forefront in this area, but other pueblos produced them too.  Aurelia was the mother of Tony Suina who was the husband of Ada Suina.

Condition: this Cochiti Pueblo Angel Figurine by Aurelia Suina is in original condition