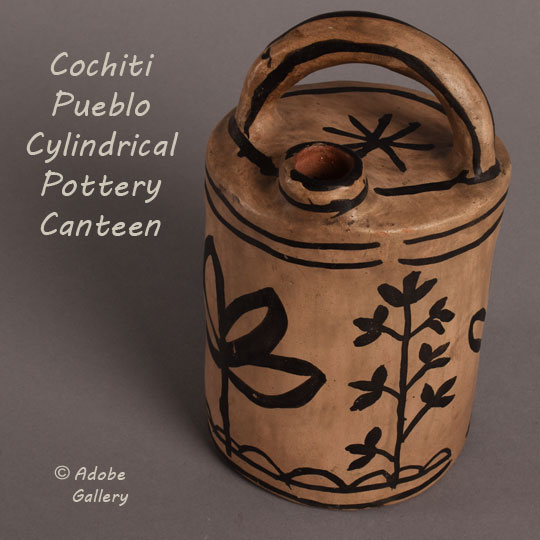 This item of Cochiti Pueblo pottery is a most unique offering. It is a cylindrical canteen, with a handle and a spout positioned on the cylinder's flat top. We see examples which we refer to as cylinders somewhat frequently, mostly from Hopi Pueblo but occasionally from other pueblos. They're rarely actually cylindrical, as the sides flare outward slightly and often curve back inward near the top. In this instance it is truly cylindrical or as close to truly cylindrical as one could expect of a handmade historic pot.

The spout and handle give the pottery cylinder a clear purpose and function, but they're visually appealing as well in both shape and design. The vessel displays the traditional cream slip and red base, with painted designs in black pigment covering much of the exterior. Four large plant designs appear around the cylinder's curved wall. Each is matched with another, which appears on the opposite side, but slight variations appear within these pairs. Sets of black framing lines with ceremonial breaks appear at the top and bottom. Additional designs appear on the top of the cylinder, and black lines circle the spout and handle.

This piece was made long before potters began signing their work, so we are unable to identify the artist, but the clay and designs are indicative of Cochiti pueblo. This unknown artist's work is beautiful, charming, and unusual.

Provenance: this Cochiti Pueblo Cylindrical Pottery Canteen is from a private Colorado collection