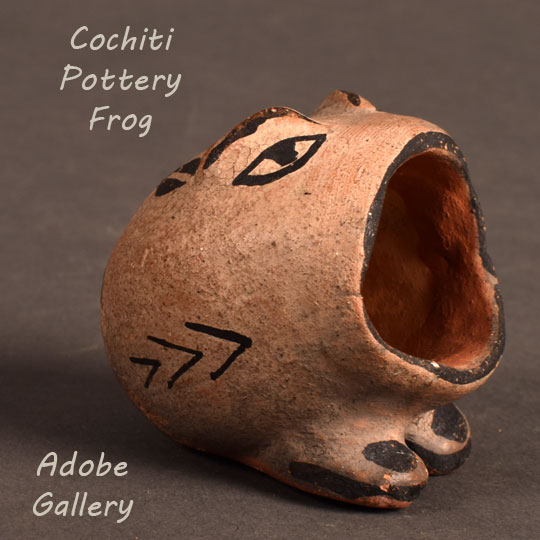 This absolutely charming pottery frog figurine has its mouth open as if singing with enthusiasm.  It is signed with the name Cooka.  The frog was beautifully built and fired successfully.  His eyes are open and enhanced by the raised eyelids.  On the frog’s back is a square maze with leaves attached to the four corners.

Pablita Quintana Cooka (1905-1979) grew up at Cochiti Pueblo and, after marriage to a Hopi-Tewa man in the early 1930s, moved to the Hopi Reservation with him.  After a few years, the couple returned to Cochiti for the remainder of their lives.  Pablita continued making Cochiti figurine pottery until the 1960s, and she died in 1979.  There is a photograph of her and additional biographical information in the book Clay Mirror.

Provenance: from the estate of Henry Christensen, former attorney at law of New York, who purchased this from us in 2008.