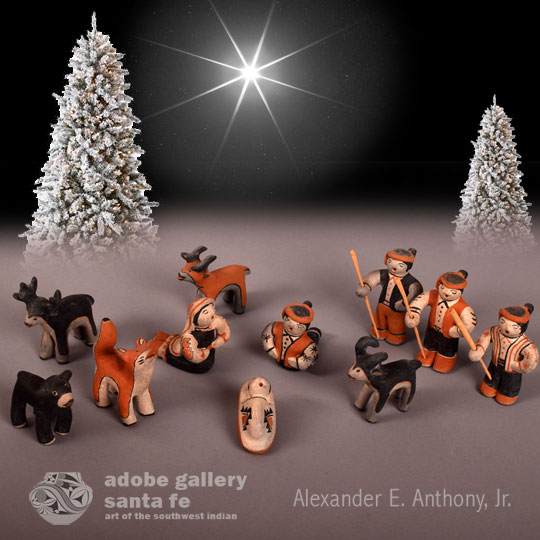 This eleven-piece nacimiento by Cochiti Pueblo artist Virginia Naranjo is typical in style to works by Virginia and Louis when they worked together. The set includes the Holy Family with Mary and Joseph kneeling around the Baby Jesus who is wrapped in a blanket on a cradleboard. The Three Kings are all standing, and each has a wooden staff. All the figures are dressed in Native clothing—moccasins, decorated shirts and blouses, men with vests and headbands, and Mary wearing a shawl over her head. Included with the nacimiento set is a moose, ram, antelope, fox and bear.

Louis (1932-1997) and Virginia Naranjo (1932-2014) worked together for many years forming figurative pottery.  They made storyteller figurines, large human figures, animals, nacimientos, and other forms of pottery. Louis created the bear storyteller figurine sometime in the 1970s after having seen a bear family, and the cubs were playing around.

After Louis passed away in 1997, Virginia continued making figurines and signed them only with her name.  This nacimiento set is one of Virginia’s without Louis’s assistance. It is signed, under the Baby Jesus, Virginia Naranjo Cochiti N.M.

Provenance:  from a nacimiento collector in North Carolina

Recommended Reading:  There is an excellent article on Louis and Virginia Naranjo in “Indians of New Mexico,” edited by Richard C. Sandoval and Ree Sheck. Published by New Mexico Magazine, Santa Fe, 1990. ISBN 0-937206-16-4. It may be available from the publisher (New Mexico Magazine).