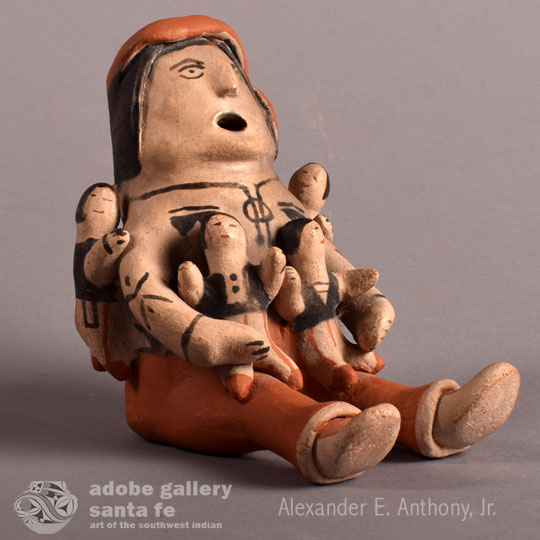 This grandfather-looking male appears overwhelmed with the four young boys in his care.  This is a pottery storyteller figurine made by Josephine Arquero of Cochiti Pueblo, daughter of Damacia Cordero.  The adult male is dressed in a pueblo style shirt and trousers. He is wearing traditional pueblo moccasins and has a headband over his hair.  The four young boys are dressed in snappy looking clothes.

The figurine was coated in traditional bentonite clay on the upper body and red slip on the lower body.  The bentonite slip is no longer available, the source having been used up quite some time ago. Many potters at Cochiti have ceased making pottery because of the lack of bentonite clay. Josephine Arquero, and her three sisters, Gloria Herrera, Marie Laweka, and Martha Arquero, are daughters of Damacia Cordero.  All of the women of the family are known for their pottery storyteller and animal figurines.

Provenance: from the collection of a client of ours.