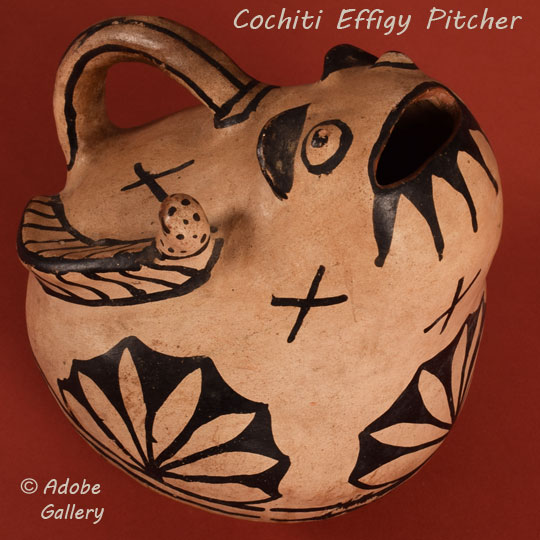 This effigy pitcher was created by an unknown Cochiti Pueblo potter, most likely in the 1930s or 1940s. Its form recalls earlier work from the 1880-1900 period, which can best be described as spherical. The jars, bowls, canteens, and figurines from that era often featured spherical shapes. Canteen-like vessels, with round forms and openings at the top, were an innovative form that developed at Cochiti Pueblo.

This vessel is an effigy form of some type of creature. Exactly what is depicted here is left to the viewer's imagination, as it is unlikely that the artist is still working today. The creature's mouth is wide open, and its eyes are bulging. A single arched handle runs along its spine, and a small serpent lounges on its back. Fan-like elements rise from a pair of framing lines down below, and a series of X designs—traditional Cochiti symbols used in ceremonial events—appear around the creature's neck.

This vessel was made by a potter of great skill. It is even and well-balanced, with a flat base. When viewing the piece head-on, the viewer will see near-perfect symmetry, which is broken only by the addition of the serpent and a few variations in the painted design. This effigy pitcher is beautiful and full of character.

Provenance: this Cochiti Pueblo Spherical Effigy Pitcher is from a private California collection