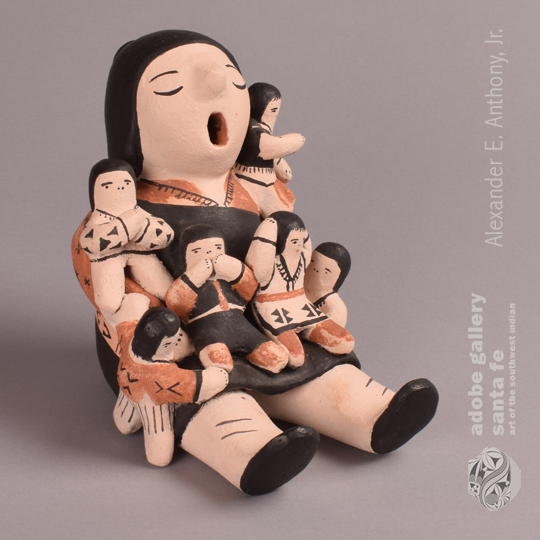 Stories are more than entertainment for Native people. Traditionally told during the cold, dark winter months, stories are a means of passing down important knowledge and ways of proper behavior. The oral transmission of myth and legend is a way to insure the preservation of culture. The person who told the stories, usually an elder, was a very well respected and beloved member of society.  Storyteller figurines were first made by Helen Cordero of Cochiti Pueblo in honor of her grandfather, the storyteller of her childhood.

Cochiti Pueblo has a long history of the production of ceramic figurative pottery, but the advent of the storyteller figure did not come about until the mid 1960s. By the late 1970s, storyteller figures had become one of the most popular items of Pueblo ceramic art. Taught by her friend Dorothy Trujillo, Mary Martin was one of the original Cochiti storyteller figurine makers. She made her first storyteller in 1974. Her work is distinguished by her careful execution of the design elements of the figure’s clothing and the peaceful rendering of the storyteller’s face. This storyteller was made in 1987.  Six individual children sit on the storyteller’s lap as she recounts a story just for them. Each child is adorned in traditional Pueblo clothing, complete with jewelry and moccasins. The storyteller’s eyes are closed and mouth open as she passes on important lessons to her listeners.  The artist rendered the details of clothing in black and slightly micaceous red paint over an evenly applied white slip. The piece has a perfect evenness of color, which is the result of expert firing. A quote from Martin can be found in Barbara Babcock’s book on storytellers: “When firing, the weather must be calm; if it is windy, figurines become smoked, which may result in a second firing. Firing depends on mother nature. It involves big chance and prayer.”  This is a well made figurine by one of Cochiti Pueblo’s earliest talented storyteller figurine makers.

Condition: The Cochiti Storyteller with Six Children is in very good condition. Some of the red paint has flaked off, but there are no cracks or chips.

Provenance: From a Santa Fe collector