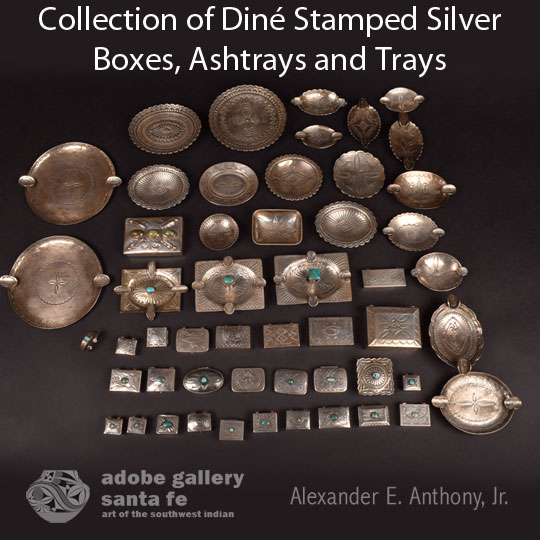 Two dozen fanciful Diné crafted silver boxes, and an equal number of intricately stamped silver trays and ashtrays, ranging in size from ¾”  to six inches, comprise this eclectic collection of rare Navajo silver tourist objects. Gathered, assembled and lovingly curated over more than 20 years, this collection of 52 silver items features some of the finest made by Diné artisans.

According to John Torres-Nez in his book Beesh Ligaii in Balance, “As the form became more standardized, and the techniques of folding and soldering the sheet silver better understood, the decoration of the boxes became the focus. The box, especially the lid, was a canvas upon which creative silversmiths could apply increasingly complex techniques. These included the addition of hinged tops so that the canvas could be displayed open, with the top in a vertical position.”  Additionally, the round silver trays and rectangular ashtrays provided ample space for designs of exquisite form.

Beginning in the mid 1800s, early Diné metal artists used hammered coin and ingot silver to form simple bracelets, beads and conchos for personal adornment. Initially, these items were decorated with file and stampwork. After the Diné people returned from Bosque Redondo to the present day Navajo Reservation, silversmithing materials became more readily available at the trading posts and designs and forms began to change.

With the arrival of the railroad in 1880, artisans began creating non-traditional objects for the sale to the tourists traveling the Santa Fe Railroad. The production of non-traditional items to sell as souvenirs such as boxes, ashtrays, letter openers and flatware became less difficult when artists were able to obtain sheet silver from the trading posts in the early 20th century. Along with the availability of sheet silver, which made the fashioning of boxes much easier, designs became more complicated and turquoise was added as a design element.

This collection of boxes, trays and ashtrays includes objects made by talented unknown artists as well as a few by well known Diné silversmiths. There is a square box (.17) by award winning smith Sunshine Reeves. Reeves is known for his meticulous rendering of traditional Diné style silverwork. There is an ashtray made by Diné artisan Suzie James (.27) which features beautiful stampwork as well as fine turquoise.

Please take a look at all of these amazing pieces of Diné history. There is something for everyone here. Each item is priced individually and we welcome your inquiry.

Items marked in RED in the Large detailed image are SOLD

Condition: All of the items in the Collection of Diné Stamped Silver Boxes, Ashtrays and Trays are in excellent condition

Provenance: From an East Coast collector