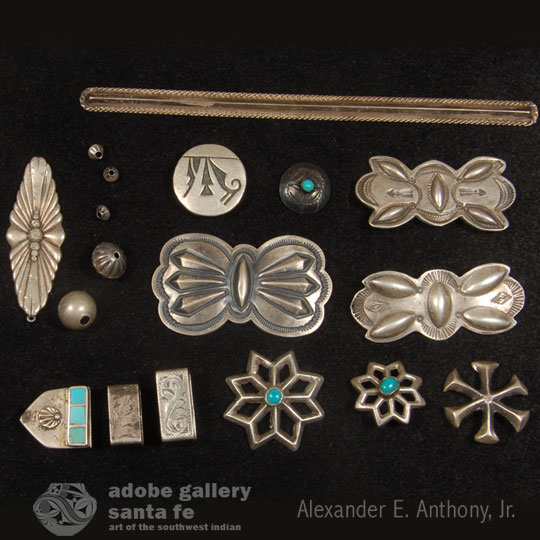 The Navajo developed a serious love of adornment with silver from their Mexican neighbors who, in turn, had adopted such a fascination from the Spanish.  There is mention as early as 1824 of Navajo wearing ornamental buttons.  Like the Mexicans, Navajo men put them on their trousers, jackets, and moccasins and, then later, put them on belts, pistol belts, gun holsters, saddles, bridles, leather pouches, straps of the pouches, and bow guards.

Women’s traditional dresses were not suitable for decorations with silver adornment but, after their incarceration at Bosque Redondo in the mid-1800s, they adopted the tight bodice and full skirt worn by the soldier’s wives which then allowed for decorations with silver buttons.  They added buttons to the blouse collars, across the shoulders, down the sleeves and on their moccasins.

Early buttons were small domes made by pressing a disk of silver into a rounded depression in hard wood or soft metal.  Over time, buttons were enhanced by pounding over a curved die employing repoussé, appliqué, and, finally, the addition of stones. Artists also used the casting method to make buttons, pouring molten silver into molds to create an even wider variety of shapes and designs.

Items in this Collection of Navajo Vintage Silverwork were made in the mid-20th century, or earlier: