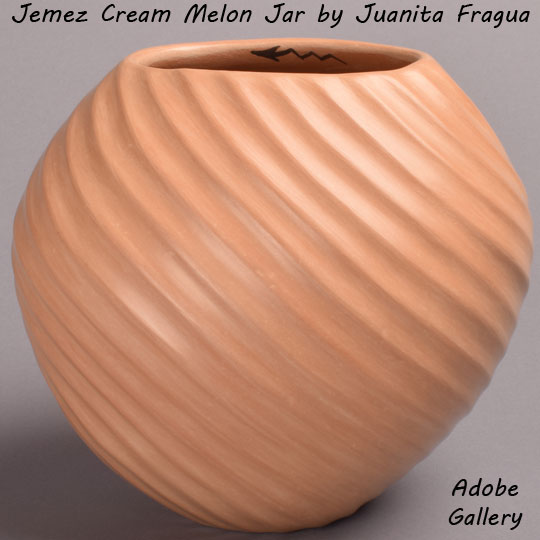 After the Pueblo Revolt and the Spanish Reconquest, the pottery making tradition at Jemez Pueblo faded. Residents of Jemez relied on their neighbors at Zia Pueblo for their pottery needs. Juanita Fragua was one of the Jemez potters responsible for the revival of traditional pottery making at Jemez Pueblo—Walatowa— during the 1960s and 1970s. She credits her Corn Clan sister from Zia Pueblo, Benina Shije, as being important in the pottery revival at Jemez.

Juanita Fragua (b.1934-) studied early Jemez pottery at the museums in Santa Fe and from these she developed her own interpretation of the ancient tradition. She also credits Al Momaday with teaching her “how to draw, how to mix paints.” (Trimble 1987:68) She is best known for her finely polished tanware with corn designs. She is the recipient of many awards, and her work is in museums across the country. She has encouraged and mentored a new generation of potters and artists at Jemez, including her son Clifford Fragua, whose marble statue of Pueblo Revolt leader Popé is in Statuary Hall in the Capitol building in Washington, DC.

This cream-colored swirl pot is one of Juanita’s signature pieces. She refers to it as her “Oval Melon.” On one side, she creates the ribs by running her index finger down the vessel wall scraping away clay with her fingernail to create the valley between ribs.  She then polishes the jar.  On the opposite side, she leaves the wall smooth and highly polished. This pot is an excellent example of some of the finest work of a master potter.

Provenance: From the collection of a New York resident

Recommended Reading: Talking with the Clay: The Art of Pueblo Pottery in the 21st Century by Stephen Trimble

Talking with the Clay: The Art of Pueblo Pottery [Paperback Edition] [SOLD]
by Stephen Trimble