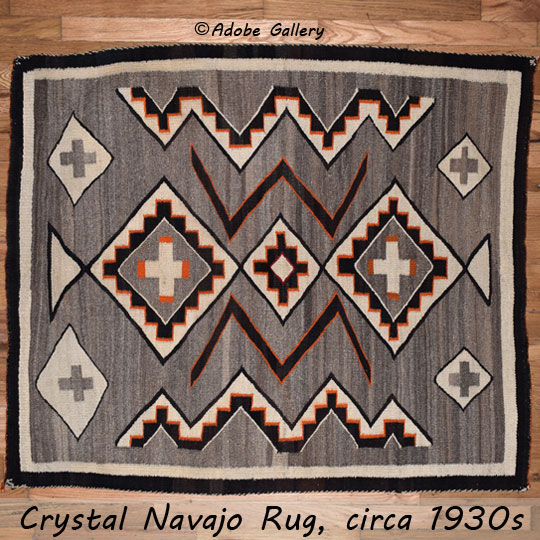 This Navajo rug is most probably a product of a weaver from the area of Crystal Trading Post in the 1930s period. The gray background of the textile clearly shows evidence of homespun native wool carded from black and white sheep. The wool was carded in batches as needed, resulting in slight mixtures of shades of gray-a very positive aspect of reservation weavings. All the wool, with the exception of the orange color, is undyed native wool. The orange was achieved with a commercial dye.

The rug is bold and interesting with the three major diamonds down its center, accented with lightning-like elements on its edges. The double border, white and black, frames the textile beautifully. Also, four cross-like symbols inside diamond elements are located near each of the corners.

Most are familiar with J. B. Moore, trader at Crystal Trading Post until 1911, who published a catalog of rugs in 1903 and another in 1911. Even earlier C. N. Cotton of Gallup, New Mexico published a mail order catalog in 1897. The purpose of these catalogs was to introduce and sell to prospective clients in the eastern United States. Another outlet for such weavings was The Fred Harvey Company which had a very large market for textiles at its many hotels along the rail system.

"Moore's designs are believed to be the forerunner of the Teec Nos Pos, storm pattern, and Two Gray Hills regional styles. The color scheme of Moore's Crystal weavings was usually a combination of hand-spun wool colors-natural white, black, and brown with carded grays and tans, and synthetic dyed red or orange." Kaufman and Selser, 1985:75]

Provenance: this Crystal Trading Post Area Navajo Rug, circa 1930s is from the collection of a gentleman from California

Reference: Kaufman, Alice and Christopher Selser. The Navajo Weaving Tradition 1650 to the Present. THE NAVAJO a reprint in its entirety of a catalog published by J. B. Moore, Indian Trader, of the Crystal Trading Post, New Mexico, in 1911 [SOLD]
by J. B. Moore