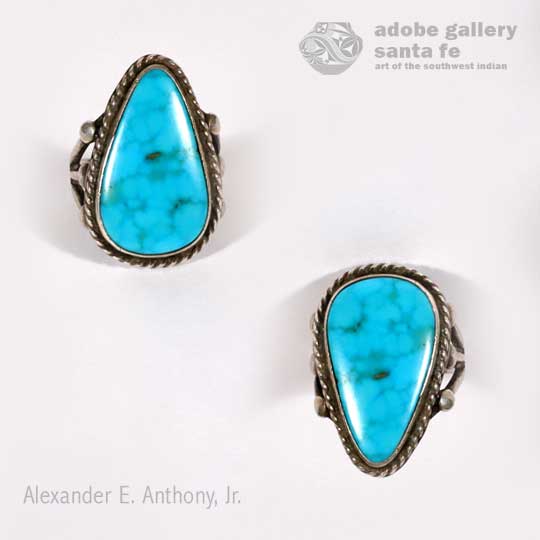 Blue Gem turquoise was used to make Native American jewelry mostly during the1940s and 1950s. The stunning deep blue color, when contrasted against a silver background, became characteristic of Southwestern jewelry. The Blue Gem mine produced a large amount of high grade turquoise in the middle of the 20th Century. The mine was closed in the 1970s.

An exceptionally fine cabochon of Blue Gem is set in this mid-century Diné ring. The turquoise has shades of blue and green with a fine golden matrix. It has been cut in a teardrop shape and set securely in a straight-edged bezel. A small band of twisted wire completes the frame. The face is set on a three-prong split-shank with silver drops at the top. The ring is unsigned.

Provenance: The ring came from a Southwest Indian Jewelry collector in Colorado

Note: when we say Diné, as opposed to Navaho or Navajo, we are referring to the people and not the government. Since 1969, their government refers to itself as the Navajo Nation.