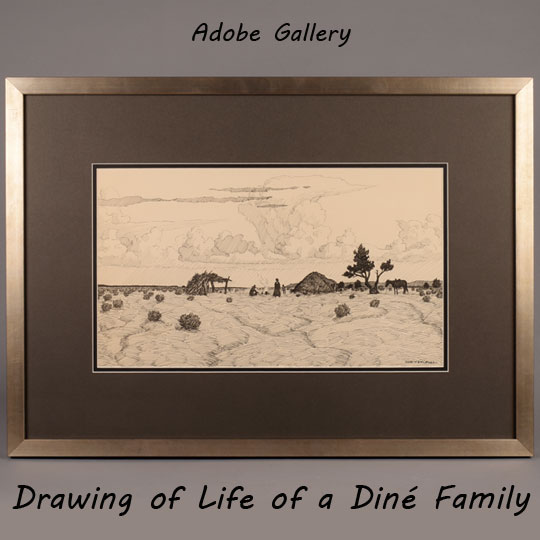 This untitled piece was created by notable Western artist Don Perceval.  It’s a wonderful snapshot of life on the Navajo Nation, completed in black ink on board.  Perceval’s work here is strong, and his chosen medium suits the image quite well.  His affinity for his subjects and their land is evident in the scene, and that quality is what elevates this piece above the ordinary.

In the center of the image, Perceval created a Diné family.  They’re tending to a fire, which is positioned directly between their hogan and a second structure.  Off to the right, a horse grazes, tied to the only tree that rises from this patch of desert.  In the distance, a storm rages, with rain falling diagonally from a massive cloud formation.  Up above, clearer skies complete the image.  This is a well-crafted, endearing image with depth and movement.  Perceval’s work with this untitled drawing is excellent.

The drawing is signed Don Perceval in lower right.  It was recently reframed using high-quality materials, including dark-colored mats and a silver frame.

Born in England, Don Perceval (1908 - 1979) became a noted painter of Southwest landscapes and their inhabitants.  His talent was encouraged by his mother, a recognized painter in England. His family moved to Los Angeles, California, where he was raised, and he became fascinated by the early history of the state. He attended the Pasadena Military Academy and Chouinard Art School where he was a student of Nelbert Chouinard and F.T. Chamberlain. By age 19, he was making sketching trips into the desert, where he became enamored of Hopi and Navajo Indians and their way of life and traditions. He began illustrating books and became an expert in the history of cattle brands and horsemen's equipment. In his late 20s, he returned to England to study at Heatherly Art School and the Royal College of Art. Here he was exposed for the first time to great collections of paintings and was inspired by classic art. He also went to Madrid, Spain, for four years, and then returned to the Southwest where he did advertising for the Rio Grande Oil Company. During World War II, he served in the Royal Navy patrolling the Thames Estuary and teaching gunnery, which he did with much acclaim by using cartoons. He then returned to California. At the advice of Millard Sheets, he taught at Chouinard Art School and Pomona College, where he organized the centennial celebration of the school. In 1952, he lived in Arizona with the Hopi Tribe. He then lived in Tucson from 1954 to 1959, where he grew to love the paintings of Maynard Dixon. He illustrated numerous children's books including for writers Ann Nolan Clark and Will Hayes. He spent his last years in Santa Barbara.

Provenance: this Don Perceval Untitled Drawing of Life of a Diné Family is from a private collection from a family from Tennessee The Life of Maynard Dixon [SOLD]
by Donald J. Hagerty

The Drawings of Maynard Dixon [SOLD]
by