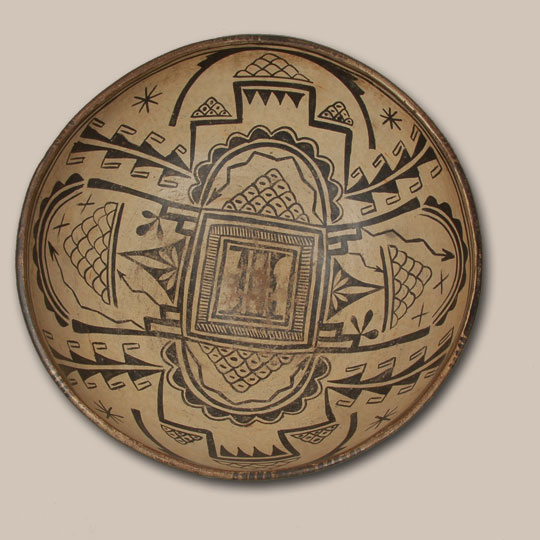 Occasionally one sees a piece of pueblo pottery which is above and beyond what one expects. That is the case with this bowl. Constructed of native clay mixed with native temper, coil formed in the traditional pueblo technique, and fired in an outdoor firing are all traditional traits one would expect. That is where the ordinary ends, and the unusual begins.

This is probably the rarest Tesuque bowl one could expect to see. It is profusely decorated on its interior and exterior to the point where one must study it seriously to absorb all the designs. There are cloud and lightning elements that are rarely used on secular vessels but mostly reserved for ceremonial ones. There are cornstalk motifs, parallel framing lines with diagonal hatching lines (only used by Tesuque), wavy lines between tower-like elements (also only used by Tesuque), a turkey on the exterior bottom and X elements representing turkey tracks, stars on the interior, and many other symbols which appear to represent the spirit of the pueblo world.

Provenance: Collection of Mr. & Mrs. Larry Frank for over 50 years.