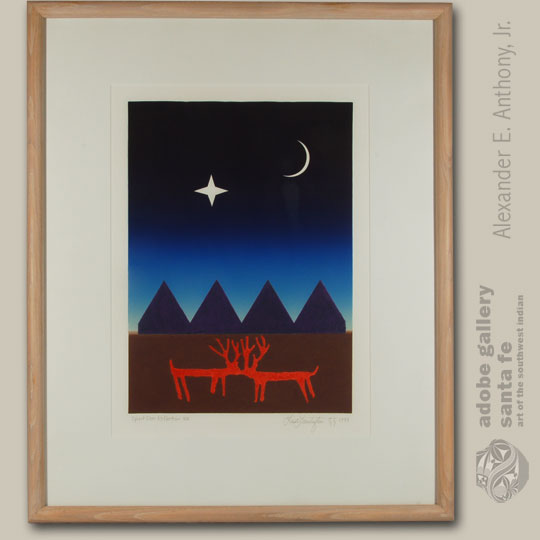 Linda Lomahaftewa (1947-) is a Hopi Pueblo / Choctaw painter who was born in Phoenix, Arizona. Her brother was Hopi painter Dan Lomahaftewa, who passed away in 2005.  Linda is an educator and a painter, now living in Santa Fe, New Mexico. She works with oils, acrylics, and various printmaking techniques, creating images that use abstract designs alongside traditional Native American symbology.  She studied at the Institute of American Indian Arts from 1962 to 1965 and earned an M.F.A. from the San Francisco Art Institute in 1971. She taught at California State University in Sonoma, at Berkeley, and then returned to the Institute of American Indian Arts as a faculty member.Monotype printing is a method of printing in which an image is created on a smooth, non-absorbent surface (usually a copper, zinc, glass or acrylic plate) and then transferred to a sheet of paper by pressing the two together.  Monotype printing offers certain advantages over lithography, serigraphy, and other forms of printmaking. The most notable of these advantages is the freedom to compose images much more spontaneously than is possible with the aforementioned printing methods.  Monotypes are not created in multiples—each montotype is a unique, original work of art that is, technically, also classifiable as a print.

With “Spirit Deer Reflections XIV,” Linda Lomahaftewa crafted a quiet, peaceful image: two deer, standing face-to-face under a moonlit sky.  Behind them, a mountain range—composed, in an understated fashion, of four identical purple triangles—reaches up into the night sky. The sky, which occupies the majority of the piece, is a sharp gradation from pale blue to almost black.  In the middle of this gradation, the artist accurately captured the rich, dark blue that seems to be unique to Southwestern skies. In the middle of this rich blue sky, the moon and a single star—actually just uninked paper—add variation to the otherwise symmetrical image.  It is signed “Linda Lomahaftewa 1997” in its lower right, and titled in its lower left.

Condition: this Fine Art Print titled "Spirit Deer Reflections XIV" is in very good condition with a slight discoloration in the blue sky beneath the moon

Provenance: from the large collection of a Santa Fe resident who is downsizing

DICTIONARY OF PREHISTORIC INDIAN ARTIFACTS OF THE AMERICAN SOUTHWEST
by