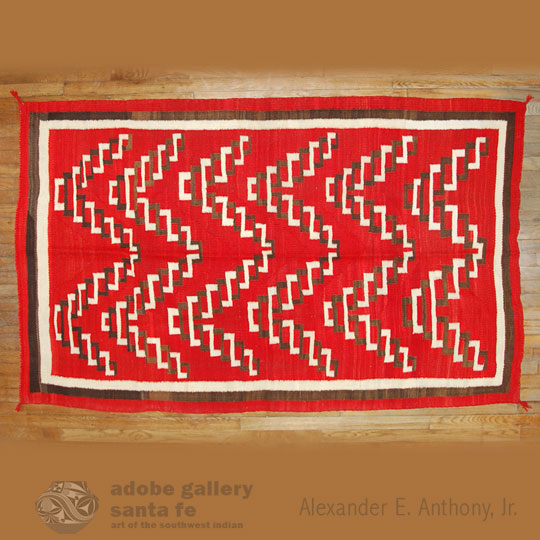 Before the arrival of the Spanish to the Southwest, the Pueblo Indians were weaving their own clothing.  Weavers at Hopi, Zuni, Jemez and Acoma have been particularly recognized for fine weaving with native cotton.  At Hopi, men were weavers. After the arrival of the Spanish, who brought sheep with them, the Navajo became the famous weavers, but it was the women who were the weavers.  It is said that the Navajo learned to weave from the Hopi, particularly from those who were captured by the Navajo.

The Navajo women were weavers of fine wearing blankets and serapes.  They became extraordinarily proficient in making the finest textiles imaginable.  The weave was tight and the patterns were beautiful.

Traders, who began arriving on the Navajo Reservation around 1880, recognized the talent of the women but there was not a demanding market for Navajo blankets among other than Native Americans, so the traders, especially Lorenzo Hubbell at Ganado and J. B. Moore at Crystal, attempted to get the weavers to transition their blanket weaving into floor rug weaving.

Rugs were a foreign idea to the Navajo.  They did not use floor coverings on their hogan dirt floors.  At first, the biggest changes to the transitional pieces were to increase the size above that of a wearing blanket, to make it thicker for better wear, and to put a border on it so it looked more like Persian rugs with which potential buyers were familiar.

Making it larger was not a problem, as that only required making a wider loom.  Making it thicker only required not spinning the yarn too tightly.  Putting a border on the textile was where the problem occurred.  The Navajo are known to believe in superstition to a significant degree and one of the things that they did not do was to close a circle or border.  Navajo baskets have a break in the pattern (Spirit Line) to prevent closing the circle or other pattern.  Decoration on Navajo pottery also has a break in the clay pattern to prevent closing the loop.  To put a border on a rug would close the border which would then trap the talent of the weaver inside the border and prevent her from making another textile.

For a period of about 20 or so years, from 1890 to 1910, the weavers transitioned their blankets into rugs by increasing the size and making them thicker, but no borders were added.  This period has been known as the Transitional Period, that is, transitioning from blankets to rugs. Blanket patterns traditionally consisted of horizontal stripes of design.  During the Transitional Period, more elaborate designs began to develop.

This rug, probably influenced by Lorenzo Hubbell at Ganado Trading Post, is larger and thicker than a traditional blanket.  The Hubbell influence is based on the large amount of red, a color he very much favored.  It does have three plain strips of color for a border, an indication that it is probably from the late Transitional Period, probably circa 1910 to 1920.  The design is comprised of natural wool with no dye and the red field is of an aniline dye.  The pattern is a chain-like design that must have been difficult to keep organized, but the weaver did a fine job of doing so.

Provenance: from the collection of an Oklahoma City resident who purchased it in 2005 from Michael Smith Gallery, Santa Fe. 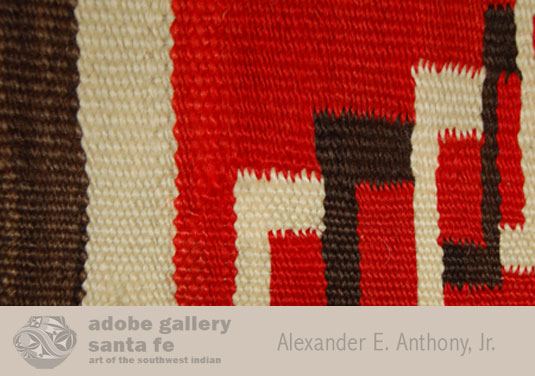 NAVAHOS HAVE FIVE FINGERS [SOLD]
by

And Eagles Sweep Across the Sky: Indian Textiles of the North American West [SOLD]
by Dena Katzenberg

BETWEEN TRADITIONS: Navajo Weaving Toward the End of the Nineteenth Century [SOLD]
by J. J. Brody, et al.