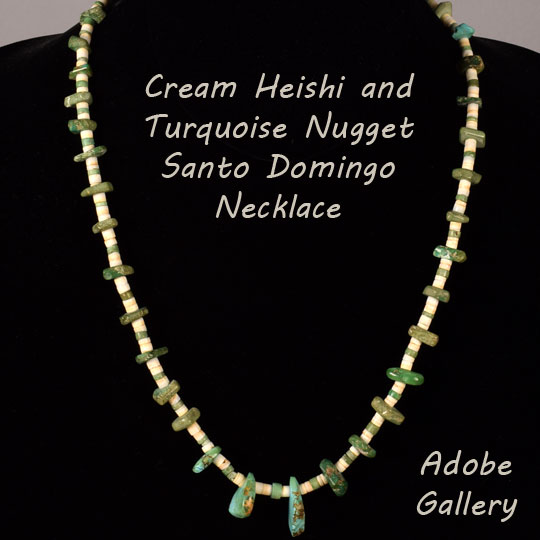 This heishe and turquoise necklace is the marriage of two worlds.  Necklaces in this style have been used by the Pueblo people for centuries and would be worn by both men and women in Plaza dances.  Traditionally, this necklace would have been strung on cotton or woven material.  However, this necklace was made for the more contemporary market—strung with metal clasps— but in the same style as its ceremonial sister.

Square pieces of cream shell and turquoise were drilled in the center, strung, and then sanded to become cylindrical.  They were then removed and restrung into the current pattern.  Cream heishe in groups of two or four at a time alternate with turquoise formed in heishe fashion.  Two inches from the clasps nugget turquoise pieces begin to be alternated into the stringing pattern.  The nugget turquoise pieces increase in size as they move away from the clasps and culminate in a large exquisite piece as the pendant.

Heishe: made from coral, turquoise or seashell. The shells or coral are first cut into small square sections, drilled in the center, strung on wire or string, then, originally, sanded by hand, in an up and down stroke, until each one is round. That sounds easy but was not. It is important to exert the same pressure on every stroke to achieve heishe of the same diameter when finished.  Artists today use a machine for sanding, as illustrated in the accompanying video, greatly increasing the output of their work.

According to the Indian Pueblo Cultural Center, the beaded tradition is most closely associated with Santo Domingo Pueblo, known for creating beautiful shell and gemstone beads by hand. These beads are called "heishe," which means "shell". Necklaces with similar bead styles have been found in the ancient Anasazi sites Chaco Canyon and Mesa Verde, and heishe may be the oldest form of jewelry in New Mexico. Traditionally, heishe beads are smooth flat discs, but today the term is used to refer to any small beads that are strung together.

Condition: This turquoise and heishe necklace is in very good condition

Provenance: This Cream Heishe and Turquoise Nugget Santo Domingo Necklace is from an estate in eastern Washington.