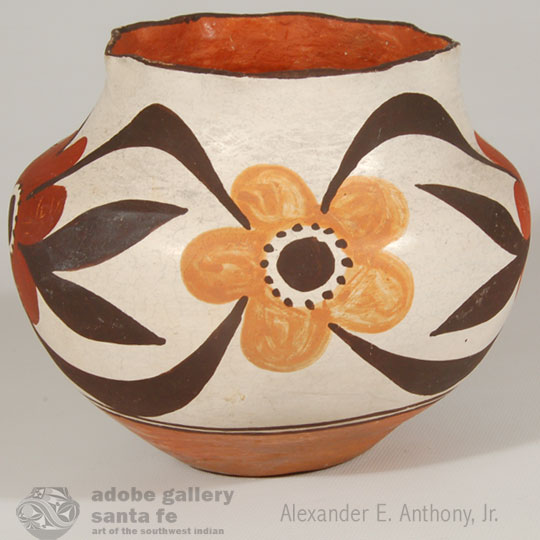 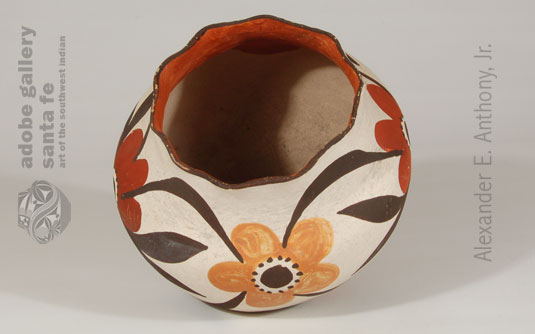 Laguna Pueblo is a nearby neighbor of Acoma Pueblo in Western New Mexico.  Laguna was founded in 1699 by members of Acoma, Zuni and other pueblos following the upheavals and disruptions caused by the The Pueblo Revolt of 1680—also known as Popé's Rebellion.  Pottery from Laguna resembles that of Acoma and it is generally difficult to distinguish between the two. Some designs, however, seemed to predominate at Laguna and those differed from designs used at Acoma.When the transcontinental train came to New Mexico, it passed directly adjacent to Laguna Pueblo and there was a depot nearby.  The train made stops at the pueblo to allow the travelers to purchase wares from the potters. The Laguna potters soon realized that the travelers preferred vessels that were easy to transport in their luggage or hand carry on the train.  It was then that smaller versions of traditional vessel shapes developed.

This small jar is typical of the size made for sale to travelers on the train and, later, on Route 66 which passed directly by the pueblo.  Small size, bold design,and fluted rim combined to make the perfect eye-catching pottery for a traveler who had only minutes in which to make a decision. This jar has four bold flowers, two in yellow pigment and two in deep red pigment. The deep red pigment was seen often in late 19th century pottery but rarely seen in pottery of the early 20th century—presumably because the source for that red clay was exhausted. This jar, probably from the 1920s, was fortunate to be the recipient of red pigment from a source guarded by a Laguna potter.

Potters from Acoma Pueblo would load up a supply of pottery and take a wagon trip the 16 miles to Laguna and set up their wares to sell to the tourists as well.  The fact that a tourist purchased a pot from Laguna is no assurance that it was made at Laguna as it may have been brought over from Acoma. That is why many academics will not attempt to distinguish between a vessel made at Acoma and one made at Laguna.

Many Laguna jars are routinely classified as Acoma jars, however, there are some designs that appear on Laguna pottery that one seldom sees on Acoma wares.  Another clue is to compare designs on pottery at Isleta Pueblo because those designs originated at Laguna and were taken to Isleta when a large group of Laguna families migrated to and set up a permanent village at Isleta.  Floral arrangements like those on this jar are seen on Isleta pottery, though generally not as large and bold but of the same style. It is easy to classify this as a Laguna jar.

Provenance: from the extensive collection of a family from Colorado 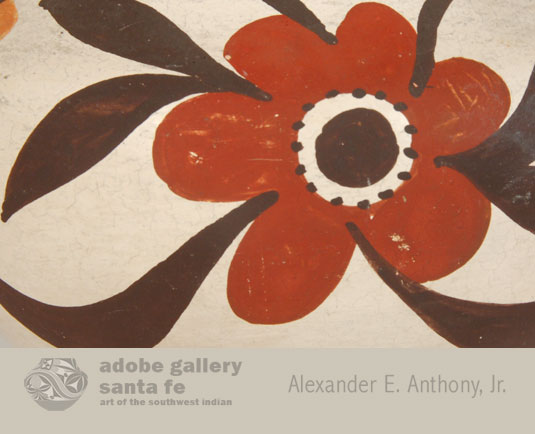