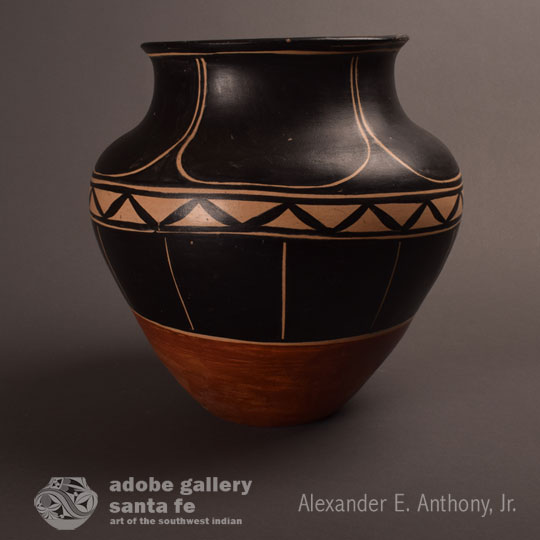 This bold and strong Black-on-cream design style has previously been attributed to Felipita Aguilar Garcia of Santo Domingo Pueblo.  However, the attributions examined so far do not provide definitive information about which sister created which style. It is well documented that she and her sister, Asunción Aguilar Caté, were responsible for creating the new styles that appeared around 1905. Definitive information regarding which one of them created which of the two basic designs is nonexistent.

With this jar, the artist painted the majority of the surface with black pigment, using thin cream lines to form the design.  The notable variation of the design on this one from most of the others of this general style is the division into three sections.

The neck and lower body designs are almost entirely black.  A cream band circles the jar just below the shoulder. It is an innovation from the all-black design seen on occasion from the artist.  The cream band circling the jar is decorated with an undulating line, in black, which matches that of the rest of the jar and links the upper and lower sections together.  The lower black section is split into rectangles by cream lines. The upper black section features long, thin “U” shaped lines moving down from and then turning back towards the rim.  The black here is deep, strong, and almost reflective; it almost resembles tar. This is an exceptional piece.

Condition: excellent condition
Provenance: this Historic Santo Domingo Black on Cream Aguilar Pottery Jar was purchased from Martha Hopkins Struever in 1997 and is pictured in the Struever reference below.