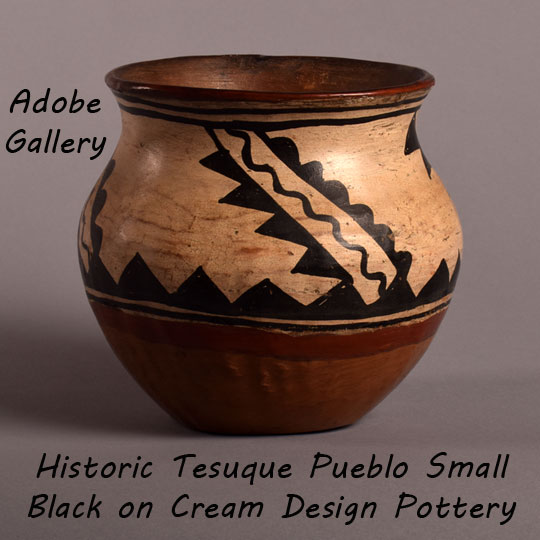 This small pottery jar has all the attributes of larger jars except for its size.  The potter took extreme care forming this jar and applying a design as she would have taken on a larger one.  She obviously was an experienced potter who was proud of her work. This is one of the most exceptional Tesuque Pueblo small jars from the historic period.

The vessel is a traditional Tewa jar shape—rounded body and incurving neck that rolls out to the rim.  The base is flat. The body, shoulder and neck designs depart from the tradition at Tesuque of using chain-like elements connected and encircling the vessel. Rather than defining the design to three regions—body, shoulder, and neck—the potter chose to use the entire area as her canvas for the design.

The design is a series of slanted elements, each comprised of three components—a series of black stepped triangles, a wavy line, and a series of stacked semicircular components. This design is repeated four times around the body of the vessel and they are confined within a black framing line at the top and another one at the bottom.

Below the design panels is a traditional wide red band separating the deigned portion with the unslipped lower body.  The beige bottom is the natural vessel clay source that has been stone polished. The deep red color of the rim is rich and vibrant.  Jonathan Batkin states that red rim slip was in almost universal use at Tesuque in 1870 but by 1880s black paint was commonly substituted. The red band and the red rim were also stone polished.  There are no ceremonial line breaks in the framing lines. Resting on the lower framing line is a line of connected black triangles pointing upward.

The jar dates to the 1880s and was a popular size for travelers to take home with them.  Jars of this scale were generally made to be sold to curio shops in Santa Fe and to tourists who wandered into the village looking for souvenirs.  Such magnificent souvenirs were eventually replaced with cheaper and smaller curio items such as rain gods. This early period of tourist visitors was the heyday of the finest pottery made for trade.

Condition: the RARE Historic Tesuque Pueblo Small Black on Cream Design Pottery Jar  is in excellent condition.  There is a slight tilt but not significant.

Provenance: from a large collection of a Colorado resident