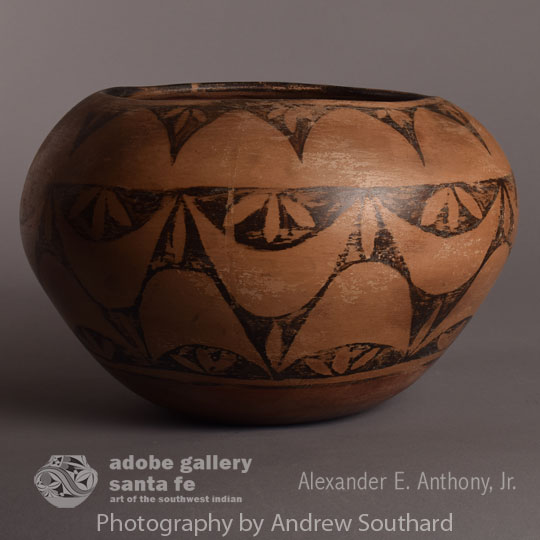 This is a somewhat unusual historic pottery jar from Zia Pueblo in that it is thick-walled, monochromatic, and with unusual design elements.  The exterior slip is traditional Zia by origin and has taken on a magnificent patina from its hundred-year existence. The brown pigment is also traditional to Zia Pueblo but the designs are what are so intriguing because they are so unlike any we associate with Zia Pueblo.

There are four design layers.  Starting at the rim there is a series of brown triangular clouds, each with three long oval “leaves.”  Below that row is a row of semicircle brown clouds, each with groups of three leaves. The striking body design exudes a feeling of motion as it wraps around the vessel in a sinusoidal wave.  The lower level of design is a mirror image of the semicircle clouds nearer the rim.

The jar is quite exciting in its unusual design concept.  It certainly was made by a potter with artistic talent and freedom to do as she pleased.  It is rare vessels such as this that reinforces our amazement of pueblo potters of the past who created such exciting vessels for her use at the time and left for us to enjoy today.  It is not a stretch to say such vessels deserve to be labeled as national treasures. We owe thanks to the potters of the past.

Condition: this Historic Zia Pueblo Thick Walled Monochromatic Design Storage Jar is very good condition for its age.  There are some pigment abrasions

Provenance: from the collection of a gentleman from Washington DC