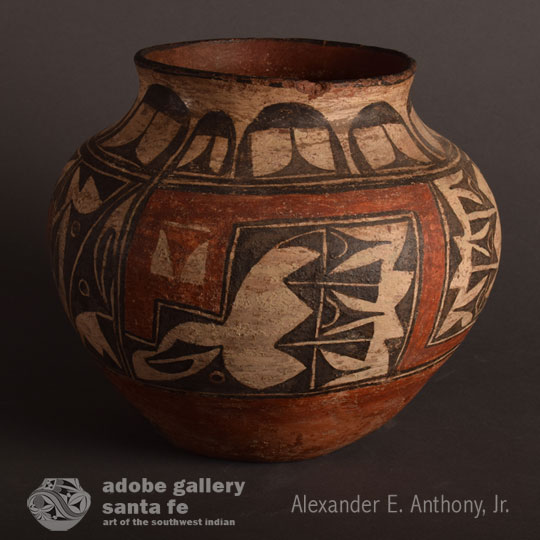 This circa 1900 Zia Polychrome jar has the unique feature of an out-curving rim, something not normally seen on Zia jars.  Additionally, it has a globular shaped body. The wide wiped-on red band underneath the design area is an indication of its age.  The stylized “feather cap design” on the curved rim is a traditional element of the Trios Polychrome period and is probably the most used design element on Zia pottery of the last century.  The back-to-back double-arc figure with bird’s eyes first appeared around 1890. The wide red bands that travel through the body design must have developed with the Zia Polychrome era. They are called “path lines” or “pathway.”  They are considered the predecessor to the rainbow arch seen in Zia pottery today.

There is probably little doubt that the continuation of the Trios Polychrome design was continued into the Zia Polychrome period because of commercial appeal.  Some may look down on such a reason but it is a fact that trading among tribes was well established long before the arrival of tourists to the Southwest. Harlow and Lanmon adequately described such, as follows:

“There is abundant evidence that the trading of pottery was a respectable activity at least as early as the 1000s, becoming widespread with the exporting of golden-colored pottery vessels by the Hopi in the 1400s and 1500s.  Zia had a long-standing commercial arrangement with nearby Jemez Pueblo; Zia potters sent beautiful vessels and received in turn the food that grows easily in the moist Jemez fields. By the late 1800s, Zia women also exchanged pottery with nearby traders for food and other goods or money.  Members of the Zia tribe today credit the women of Zia for saving the pueblo during the bleak years of the early 1900s by making pottery and trading it for food and other essentials.” Harlow & Lanmon, 2003:6

This small Zia jar will win the hearts of collectors.  Its uniqueness to the period, the vessel’s globular shape, the out-turned rim, and the design are all attributes that draw one’s attention and appreciation.  The jar has a firecloud on one side, an indication of traditional outdoor firing.

Condition: this Historic Zia Pueblo Polychrome Child Size Pottery Jar is in very good condition with minor abrasions on the pigment due to use as a water jar.