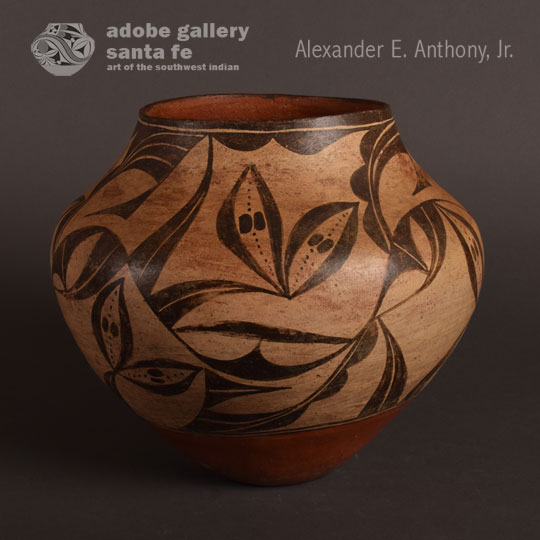 The polished red lower body of this pottery jar is traditional to Zia Pueblo, but the monochromatic design approach and the artistic layout of the design are not like the works of other potters of the period.  Documented examples of her pottery are dated to the early 1920s and we believe this one to be the same.

This jar has design elements observed in pottery by Rita [Salas] Shije Kayeiti’ and we have made the attribution to her as the potter who made this one.  No other potter’s designs have been similar to these, so it is logical to make such an attribution to her.

The design on the vessel body stretches from the polished red lower body to the rim without a division at the shoulder.  The full body of the jar was reserved for design, and the design chosen is light and sparse, yet is sufficient for the size and shape of the jar.  Floral elements spring up from the base in the form of plants outlined in brown pigment and left unpainted on their interior except for two sizes of dots. Dark brown split leaves in curved and triangular shapes abound over the body.  They suggest a windswept motion. An undulating line of clouds swirls up and down as it travels around the body of the jar. Additional clouds hang from the upper framing line. The rim is dark brown pigment and the interior of the rim was painted in red slip for 1-½-inch.

The overall feel the design imparts is one of lightness and movement with energy and precision.  The jar is certainly one of the prizes from Zia Pueblo from the turn of the last century. Many Zia jars from that period are similar in design but this one speaks its individuality.

Zia Pueblo potter Rita [Salas] Shije Kayeiti created pottery long before signatures were the norm. These early pots were made for herself.  Tourism had not yet taken off and New Mexico had only recently become a state of America's Union. These were different times and the pottery created was utilitarian and very beautiful at the same time.

We know of Rita Salas Shije's work through a photograph by Edward S. Curtis and photographs of pottery by her from the R. M. Camp Company, 1922, and the Julius Gans Store, Santa Fe, 1921. The jars in these two photographs share a graphic layout of a significant area of undecorated space. The jar from the Camp Company photograph has paired oval dotted-leaf forms that are similar to those on the jar in this presentation. There is little doubt that the artist of the two is the same. Ibid