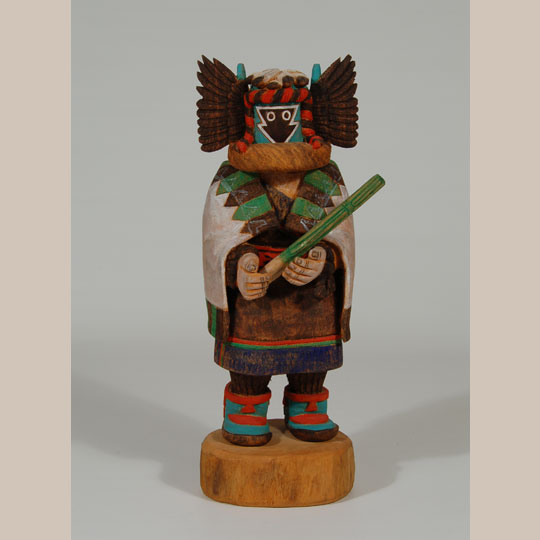 In the 1980s and 1990s, I made bi-weekly trips to the Hopi Reservation to purchase katsina dolls from specific carvers.  One carver whose dolls I particularly liked was Lowell Talashoma who lived in the village of Shongopavi.  Eventually, Lowell introduced me to his younger brother, Todd, who lived in the village of Moenkopi.  I discovered that Todd was producing exceptional carvings but they were not like those of his brother.

Lowell was slim and his carvings portrayed slim images.  Todd Talashoma was a beefy person, not fat, just beefy, and his carvings mirrored his body style.  I found it interesting that each of them carved in the likeness of their own body styles.

This Crow Mother Katsina doll is short and beefy, as Todd always favored.  It is a one-piece carving from cottonwood root.  The only additions are the crow wings on the head and the yucca in the hands.  It is a doll I purchased from Todd and sold to a family in Albuquerque in 1984 and now have it back for re-sale.  It is signed Todd Talashoma 12-84 Hopi.

Condition:  the doll is in excellent condition.  The bundle of yucca leaves was originally attached to the left hand with a touch of glue and is now free from the hand.  It is better to leave it loose for shipping to prevent breakage.  A touch of Elmer’s glue on the finger tips would secure it in place again although it will sit safely in the doll’s hands without gluing.