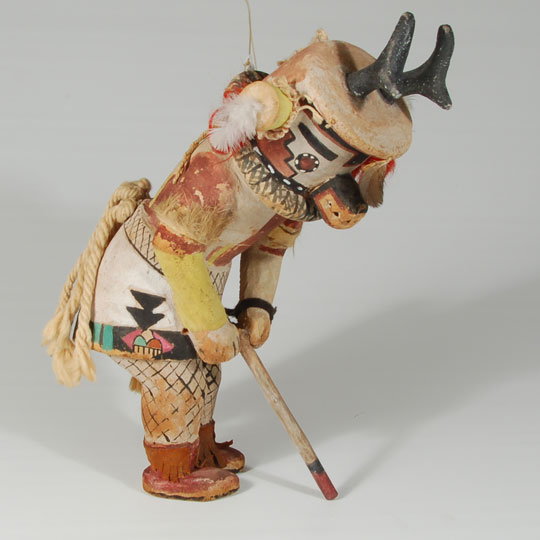 It is believed by the Hopi that Katsinas embody the spirits of living things and the spirits of ancestors who have died and become a part of nature. It is believed that Katsinas possess powers over nature. Katsinas are personated by men of the village and, in doing so, they become the supernatural with all the powers associated with the supernatural Katsinas. As supernaturals, they may cure disease, grow corn, bring clouds and rain and reinforce discipline and order in the Hopi world.

Animal Katsinas, in addition to possessing the functions mentioned above, have the power to strengthen the chance of abundant animals for hunting season. Hunting animals for the Hopi is not a sport but a necessity for provisions for the winter. There are Katsinas representing Deer, Antelope, Rams and other hunt animals. This doll represents the Antelope Katsina.

This carving pre-dates the advent of acrylic paints in the 1960s. It appears to date from the period of pre-World War II, probably the 1930s. The doll stands firmly without use of support.

Otto Pentewa (1886-1961) and Wilson Tawaquaptewa (1873-1960) were the first Hopi katsina doll carvers to have dolls attributed to them by name. Both carvers became famous in the 1920s-1930s and each had a very distinctive style. Collectors, with little difficulty, can identify the unsigned carvings of these two individuals.

There is an excellent article entitled "The Katsina Carvings of Otto Pentewa," by Barry Walsh in American Indian Art Magazine, Summer 2001. I strongly recommend it to anyone interested in works by Pentewa. It may be purchased directly from the publisher.

Condition: It is in remarkable condition for its age. There is some paint loss but nothing of great significance. Both horns were damaged and have been replaced. 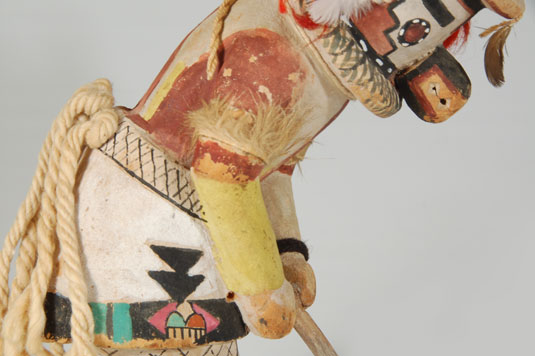