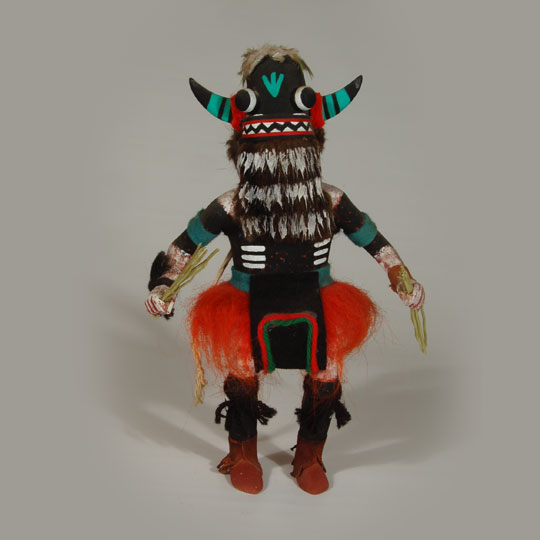 “When the time approaches for whipping the children during ceremonies in the kiva, a signal is given and the three Kachinas: the Crow Mother and her two sons, the Hú Kachinas, come rushing toward the kiva.  There they make four circuits of the hatchway creating as much noise as possible by beating the hatchway with their whips and bounding about to make their rattles sound.  At the end of the fourth circuit they enter the kiva and take their positions north of the fireplace.  The initiates are brought forward by their ceremonial god-parents and placed on the sand painting.  The Hú Kachinas advance and give them four strokes with their yucca whips.  As each candidate is struck the yucca whip is waived through the air with a wicked swish.  This is a gesture of purification.

“After the Hú Kachinas finish whipping the children, they whip each other and then the Crow Mother.  The Kachina Chief then dismisses them with prayer feathers and cornmeal.  They depart as noisily as they came.” Wright, 1973

This carving is an accurate representation of the Hú Katsina.  He carries yucca strips in each hand which are used to whip the children.  The whipping is not harsh but is ceremonial and lightly applied.  It is not meant to hurt the children. This Katsina is not signed with the name of the carver.  It dates to circa 1970.