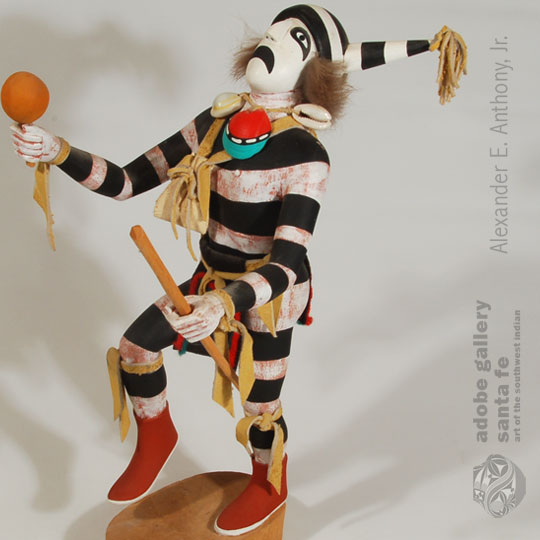 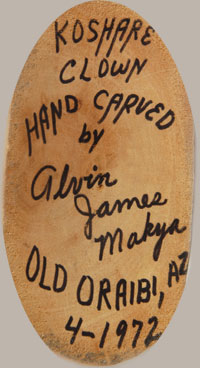 “Alvin James Makya brought many important contributions to the development of Hopi carving.  He made the leap from traditional Katsinas to ‘Action Figures’ to fine art wooden sculptures.  He also developed new techniques and tried new materials.  He recalled: ‘I think I was one of the first ones that tried sculpture and also the technique of painting the dolls with small strokes, making it look like the Kachinas themselves and letting some of the flesh show.  Now everybody does that.  I also used acrylic paints instead of flat paints.’

“Alvin hand-carved feathers, rather than using real feathers.  He was one of the first to try basswood, a heavy, imported wood that comes in big chunks.  In contrast with cottonwood root, basswood allows for finer detailed carving.  Some of the most refined dolls have taken up to three years to complete, while working on other smaller dolls that can be finished more quickly.

“Alvin James Makya and Wilfred Tewawina are credited as the originators of a style of Katsinas called ‘realistic sculptures.’  Clara Lee Tanner popularized Alvin’s contributions in Ray Manley’s Hopi Kachinas book.  By 1977, Alvin’s carvings were valued higher than any other carver at the annual Hopi Show.” Schaaf 2008:199

This carving of a Hopi Koshare Clown is dated April 1972, the beginning of the carver’s acceptance by collectors as one of the finest carvers on the reservation.  The body is well proportioned and finished to a smooth surface.  Around the Clown’s neck are shells and his medicine pouch.  In his left hand he carries a long stick and in his right hand he carries a gourd rattle.  He is wearing traditional pueblo moccasins and a loin cloth.  The doll is signed and dated on the underside.

Condition: this Hopi Hand Carved Koshare Clown is in very good condition with a minor paint loss on the left shoulder

Provenance: This was in the inventory of the Popovi Da Studio at San Ildefonso Pueblo at the time it was permanently closed.  It was then passed down through the family to his granddaughter from whom we just received it. 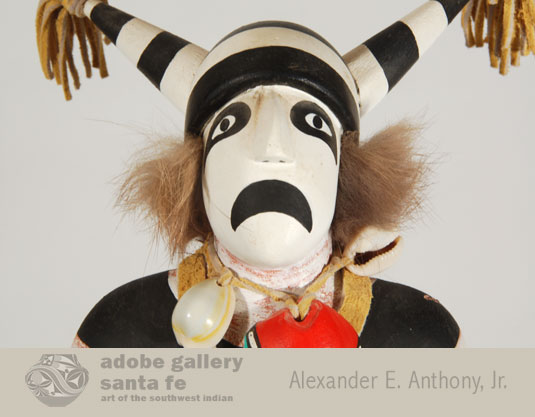